Both directions of NKVE To be temporarily closed for DASH construction

KUALA LUMPUR: Both directions of the New Klang Valley Expressway (NKVE) from KM19.65 to KM19.8 will be temporarily closed from Jan 22-26 due to the bridge beam works to be carried out under the Damansara-Shah Alam Sdn Bhd (DASH) project.

Projek Lintasan Kota Holdings Sdn Bhd (Prolintas), in a statement on Thursday (Jan 20), said the closure from 12.01am to 5am was to ensure the safety of highway users and avoid any unforeseen incidents during the bridge work.

"Users of the NKVE from the direction of Klang heading to Kuala Lumpur will go through the slip road to Kota Damansara and make a 'U' turn at the Kota Damansara Toll Plaza, using the route opened before passing the toll plaza.

"For NKVE users heading towards Klang from Kuala Lumpur, they will take the slip road to Kota Damansara, and then make a 'U' turn on the same route before the Kota Damansara Toll Plaza," according to the statement.

It suggested that motorists from areas around Klang use the Guthrie Corridor Expressway (GCE) by going through exits to Shah Alam, Kuala Selangor, and Tanjung Malim as an alternative to heading north.

Meanwhile, road users from the north are advised to use the LATAR Highway and the GCE by exiting via the slip roads to Shah Alam, Klang and KLIA as an alternative to heading to Klang.

Prolintas also said that road diversion notification signs would be provided adequately on the closed routes and users are advised to abide by the direction signs and instructions of traffic officers to use the alternative routes provided.

In the meantime, Prolintas said a total of 39 bridge beams will be launched across the NKVE, involving the use of two cranes weighing 200 tonnes that will be placed in the middle of the expressway. - Bernama 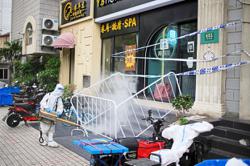