Gomez, who resigned from the MACC’s Consultation and Corruption Prevention Panel last month, said that the ACAB board members had admitted that they have no power to exonerate Azam, something which they allegedly did in November last year after hearing the top graft buster's explanation about the shares he owned in 2015.

"To my mind, the honourable thing would be that they would have to step down.

"Because... by their own admission, they did something that they now acknowledge they should not have done or they have no authority to do," he told news portal Malaysiakini.

On Jan 5, the ACAB chairman Tan Sri Abu Zahar said there was no pecuniary interest or conflict of interest on the part of Azam over the issue of acquiring shares of two companies in 2015 as the chief commissioner did not purchase the shares himself but was done by his young brother.

The board had called for a meeting on Nov 24 last year and had summoned Azam to explain the allegations.

On Jan 8, the six had issued a statement, distancing themselves from the statement made by Abu Zahar over the shares controversy implicating MACC chief commissioner Tan Sri Azam Baki.

They said they were not satisfied with the explanations given by Azam, despite Abu Zahar saying otherwise during the press conference last week.

Gomez urged the board members to produce the minutes of the Nov 24 meeting so that the public could see what had really transpired in the discussion.

"Did they act appropriately when the issue was first brought to the board meeting on Nov 24?

"If, by their own admission, they did something which they knew they had no authority to do, which is to exonerate Azam, why did they do it?

"Should they be held accountable for exonerating Azam when they have no authority to do this?" he asked.

Gomez also questioned how members of the Anti-Corruption Advisory Board were selected to join the board.

He claimed that the advisory board members had failed to function as required, which is to serve as a check and balance mechanism for MACC and its top management.

"This comes back to the question - who decides? Are we sure the members selected to the advisory board and panel will do their job as check and balance as required?

"Those are among the lessons we have learned. This crisis has shown they are not functioning as they should function," said Edmund. 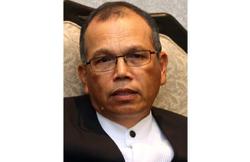