SEGAMAT: Livestock breeder Tey Teng Swee took five years to build his cattle farm at Batu 7 Jalan Muar near here but saw everything destroyed by the floods in just a few minutes.

In tears, the 60-year-old farmer said 120 head of cattle were still missing since his farm was hit on Sunday (Jan 2).

Tey said he did not expect the floodwater to submerge his 2.4m-high (8ft) cowshed.

"My workers and I tried hard to get the animals out, but it was futile because the area was already flooded and the cattle were tired as they had no food.

"We managed to save only about 20 of them using a boat,” said Tey, whose left arm was in a sling.

"I broke my arm while rescuing my cattle,” he said on Thursday (Jan 6).

Tey even lost some of the cattle that were rescued because of their weakened condition.

Although the Veterinary Services Department helped provide food to the animals, he said, the cattle were not able to move in the water due to the strong current.

"I don't know what to do now. They are still weak,” he added. 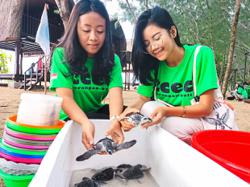