IPOH: A PKR assemblyman was ejected from the Perak state assembly after he repeatedly interrupted a state executive council member’s winding-up speech.

“Before I entered the hall, I was told that Deputy Speaker Khalil Yahya had made a ruling asking the Ulu Kinta assemblyman to leave the hall for his behaviour,” said Zahir.

“Therefore under Standing Order 442, I ordered him to leave the hall for a while,” he added during the state assembly sitting.

A commotion had broken out earlier when Arafat and Hasnul Zulkarnain Abd Munaim (Ind-Titi Serong) demanded Abdul Yunus answer their questions regarding price hikes of certain items like tomatoes and chicken.

Although Khalil, who was presiding then, had given Arafat a chance to speak, the latter continued to disrupt the sitting after his question to Abdul Yunus was not answered.

Arafat had, on Wednesday (Dec 15), caused a scene at the state assembly when he held up a slaughtered chicken during a debate on poultry prices.

“I have given Abdul Yunus some time to explain the price hike and what will the state government do about it but he has not answered me.

“I am now ordered to leave the hall because I spoke up about an issue that is important to the people,” Arafat said before leaving.

A fowl display to drive home a point 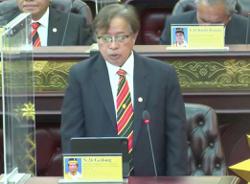