(From left) Avril Clarice Chin Ning, Ivan Alexander Ong and Addam Johanson Jeremy Shayne have filed a judicial review to exercise their right to vote in the Sarawak state election.

KUCHING: Three youths have filed an application for a judicial review at the High Court here seeking to exercise their right to vote in the 12th Sarawak state election.

Avril Clarice Chin Ning, 18, and 19-year-olds Ivan Alexander Ong and Addam Johanson Jeremy Shayne filed the application against the Registrar of Electors for Sarawak and the Election Commission on Wednesday (Dec 8) through lawyers Clement Wong, George Lo and Simon Siah.

Their action comes following Undi18's gazetting on Dec 15 to be implemented from January next year, whereas the state election on Dec 18 is using the electoral roll last updated on Nov 2.

Wong said the youths were seeking a declaration that they are citizens entitled to vote in any election held after Dec 15 this year.

They are also seeking to quash the Election Notice which set polling on Dec 18 and the Electoral Roll Notice gazetted in the second quarter of this year, as well as an order compelling the respondents to take urgent steps to ensure that 18- to 20-year-olds are included in the supplementary electoral roll for the state election.

Wong said the application will be heard by the High Court on Dec 13.

"Hopefully a decision can be made before polling day on Dec 18," he said.

He noted that the voting age has been lowered from 21 to 18 years with the gazetting of Undi18 on Dec 15, which also provides for automatic registration of voters once they reach 18 years of age.

"In effect, all citizens upon attaining the age of 18 will be entitled to vote in the 12th state election and automatically be registered as voters.

Earlier this month, Minister in the Prime Minister's Department Datuk Seri Wan Junaidi Tuanku Jaafar said 18-year-olds would not be able to vote in the state election despite Undi18's gazettement, as the polls only involved the electoral roll updated as of Nov 2.

He also said the implementation date for Undi18 is only from January, adding that this was based on the legal process and not meant to deny the rights and aspirations of 18-year-olds to vote. 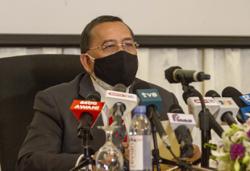