KUALA LUMPUR: Malaysian actor Chew Kin Wah has become a celebrity among the Indonesian diaspora because of his roles in the republic’s film industry.

“It’s very encouraging to be recognised, not just in Indonesia, but outside the country,” he said.

Chew said he was often addressed as “Koh Afuk” by his Indonesian fans because of the role he played in the popular sitcom “Cek Toko Sebelah”.

He played the family head of Chinese ethnicity of a sundry shop.

The popular series ran for two seasons and is now on Indonesia’s Netflix.

Chew said he had been asked to have selfies by Indonesians in Hong Kong, Malaysia and Singapore.

He said “Koh” was used as “brother” in addressing an elder Chinese man in Indonesia.

The Ipoh-born actor, who has been in the local film industry, acted as Ahok’s father in the movie “A Man Called Ahok”.

Chew said he had learnt Hakka as part of his role as the father of Basuki Tjihaja Purnama or Ahok, the former governor of Jakarta.

“It was a big role and certainly an honour, “ he said in an online interview with veteran journalist Datuk Seri Wong Chun Wai.

Both spoke in Bahasa Malaysia and Bahasa Indonesia in the talk, aired on social media.

Chew shared that a lot of changes were taking place in Indonesia, saying in Malaysia, there were limited roles for Chinese in the Malay movie industry.

Saying he often played the roles of “gangsters, Ah Long and communists in Malaysia”, he was glad to take bigger roles in Indonesia.

He said in Indonesia, he was given a language coach to speak Bahasa Indonesia.

Playing the role of Ahok’s father, he said the location shooting was in Pulau Belitung in Sumatra, where Ahok grew up.

Chew said issues relating to the Chinese including their sentiments were now openly discussed in the movies, without any sensitivity.

He cited movies like “Tanda Tanya” and “Di Balik 1998” which touched on racial riots in Indonesia.

“People must have open minds. In Indonesia, no one can tell what their religion is,” he said.

Chew also said a movie was even made on the life of Chinese ethnic badminton player Susy Susanti. 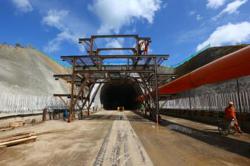