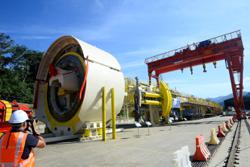 Aerial view of the MRT Conlay Station under construction in a densely built-up urban environment. It is one of the stations along the Putrajaya Line.

MMC-GAMUDA, the underground works package contractor for the MRT Putrajaya Line, is ending the year on a high after sweeping two prestigious international awards for tunnelling excellence, with a possibility of scooping a third one on Wednesday.

Last Thursday, its network of tunnels and underground stations for the Putrajaya Line of the Klang Valley MRT project won the International Tunnelling and Underground Space Association’s (ITA) Major Project of the Year (for projects above 500 million euros), beating out Egypt’s Ismailia Tunnels under the Suez Canal and China’s Shantou Bay Tunnel project – the world’s largest undersea tunnel.

The Putrajaya Line project also bagged the International Project of the Year at the Ground Engineering Awards 2021 hosted in London by the official publication of the British Geotechnical Association since 1968.

Based in Switzerland, ITA is an industry grouping to champion and celebrate the benefits of proper use of underground space for the common benefit of all.

To win the Major Project of the Year, the project was evaluated for its industry-advancing techniques to overcome significant technical challenges as well as value delivery for the client and local community. Non-engineering initiatives – including initiatives to improve local workforce capabilities, inclusiveness and diversity, as well as sustainability – were also assessed. 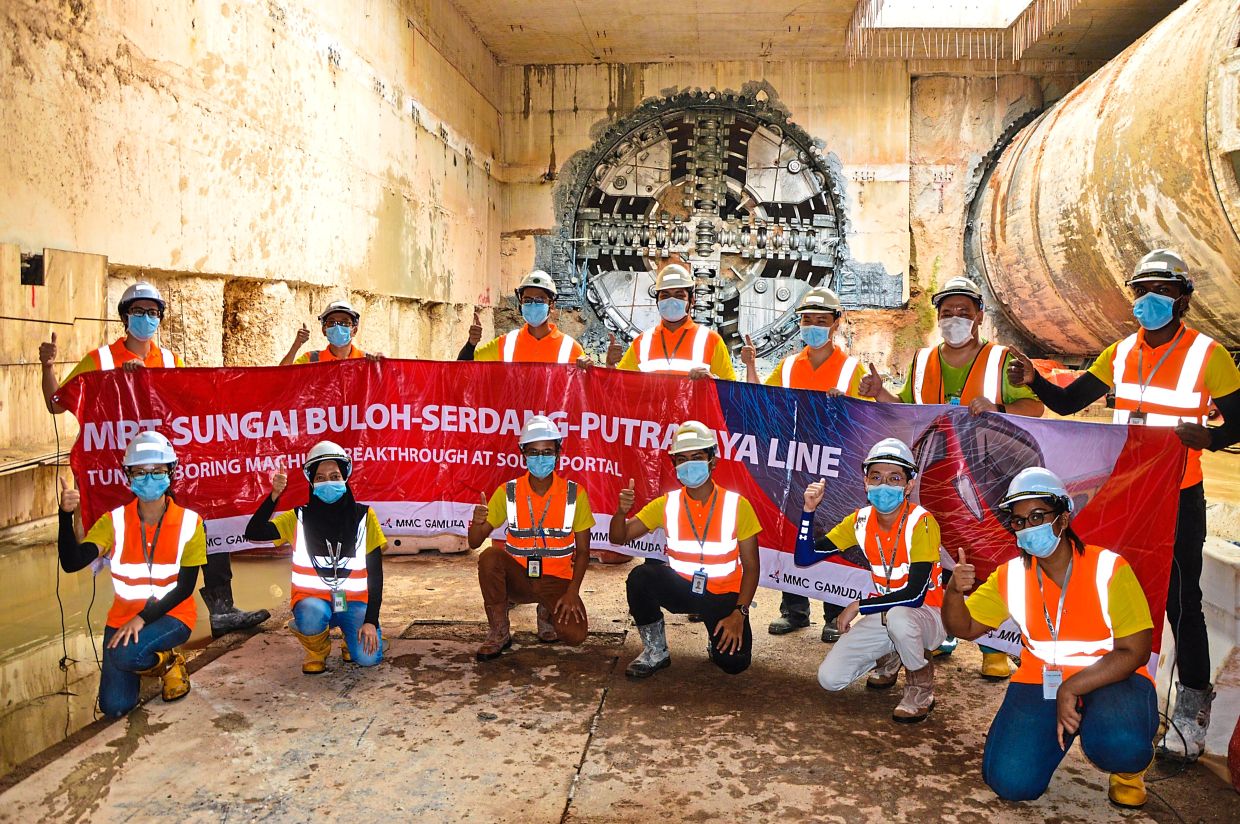 Scheduled for full opening in 2023, the Putrajaya Line is the second MRT line that will serve a corridor with around two million people stretching from Kwasa Damansara, a new township near Sungai Buloh, all the way towards Malaysia’s federal administrative centre Putrajaya.

The alignment is 57.7km in length, consisting of 44.2km of elevated portion and 13.5km of twin tunnels, hosting 27 elevated stations along with nine underground stations, with provisions to add another four stations should the need arise.

The Putrajaya Line has 10 interchange stations with existing metro lines, as well as to future lines, including the proposed Kuala Lumpur-Singapore HSR.

According to MMC-Gamuda project director Adil Putra Ahmad, MMC Gamuda ticked all the right boxes with its extensive experience managing all phases of the Putrajaya Line’s project delivery – from engineering through to procurement, construction, and commissioning to take the win.

The awards also recognised MMC Gamuda’s unique “Covid-ready” ecosystem for managing Covid-19 risks to the project that enabled the delivery of the tunnelling works safely and on schedule.

Adil said the award submission was done at a time when the pandemic was at its peak following a flurry of initiatives implemented by MMC-Gamuda to minimise work stoppage due to the pandemic.

“Recognising Covid-19 as the top risk to project delivery, MMC Gamuda set up a one-of-a-kind ‘new normal ecosystem’ comprising the only privately-owned RT-PCR laboratory in the country with a dedicated crew of over 40 medical professionals to carry out fortnightly screening of the entire workforce of over 20,000 – ranging from senior management down to site operatives,” he said.

This frequent screening regime coupled with very stringent SOPs was crucial to enable the project team to nip Covid-19 cases in the bud before they developed into larger clusters. With the rising national Covid-19 cases then, MMC Gamuda constructed new centralised labour quarters (CLQs) and centralised quarantine quarters (CQQs) in under four months for the redistribution of its workforce across these facilities to reduce density and improve physical distancing.

Existing CLQs on the project sites were also reconfigured and retrofitted with segregated common facilities to curb the spread of Covid-19, in addition to having dedicated quarantine blocks for positive or suspected cases.

These facilities were touted as a “gold standard” for Covid-resilient worker accommodation by local authorities – which was covered extensively by the local media as a model to follow.

These efforts demonstrated a clear divergence at the time, between rising national infection trends versus the organisation’s relatively low infectivity rates, thus securing the confidence of authorities to allow work to continue while nationwide lockdown was in force. Gamuda Engineering managing director Justin Chin, who led the efforts to win these prestigious global awards, said the team had to demonstrate to the international panel of judges through multiple rounds of judging how the organisation overcame a host of challenges with innovative solutions as well as the uniqueness of its non-engineering initiatives.

“We demonstrated our continued ability to innovate during a very difficult time for the construction industry, even as we battled to overcome significant technical challenges to ensure value delivery for our client and other stakeholders during a pandemic environment. Our close and collaborative relationship with our client MRT Corp ensured that we consistently delivered a best-for-project outcome,” he said.

Further validation of MMC Gamuda’s comprehensive approach to safety and health also came from external parties such as the British Safety Council (BSC), which gave the organisation four consecutive five-star Occupational Health and Safety Audits since 2018.

To top it off, MMC Gamuda was also accorded two consecutive Swords of Honour for its safety and health performance from BSC, with a third currently under evaluation (pre-qualified).

Building on the success of the Variable Density Tunnel Boring Machine introduced in the Kajang Line project in the mid-2010s, the Putrajaya Line broke new ground with more award-winning innovations.

Having successfully navigated over 10km of tunnelling in challenging mixed ground conditions, the system was recognised by ITA as the Technical Product/Equipment Innovation of the Year in 2019.

“MMC Gamuda’s cutting edge and industry leading innovation has also been a key differentiator on the project,” said Chin.

The company became the first in the region to be certified BIM (Building Information Modelling) Level 2 by the British Research Establishment, following the project’s comprehensive adoption of BIM for impactful applications.

One example is the BIMAR (Augmented Reality for BIM) mobile application, which uses the camera on a tablet to overlay 3D BIM models on the actual built environment to allow for clashes and errors to be spotted instantly on site, minimising costly rework.

Another award-winning innovation deployed on the project is the cloud-based Geospatial Information System (GIS) portal which enables seamless collaboration between stakeholders by integrating drone surveys with BIM models for monthly up-to-date 3D progress reports of all construction sites.

“All the achievements outlined so far would not have been possible if not for the all-round innovative DNA coming from a strong pipeline of local talent and expertise,” said Adil.

“Large scale upskilling initiatives ranged from establishing Asia’s first purpose-built Tunnel Training Academy in Selangor, a BIM academy where over 2,500 young Malaysians have been trained to be underground-work ready, all the way to the KVMRT Safety Training Centre where over 50,000 personnel of all ranks had been upskilled.”

At the Tunnel Training Academy, over 1,000 personnel – many of them school leavers hailing from underprivileged backgrounds – have graduated and launched their tunnelling careers on the project, with some progressing to undertaking TBM refurbishment work.

As a result, eight tunnel boring machines from the Kajang line (Malaysia’s first MRT) were refurbished and recommissioned for the Putrajaya Line, resulting in over RM400mil in savings for the client, besides avoiding additional carbon emissions from procuring new tunnel boring machines and associated equipment.

“We wish to acknowledge that these two international wins would not have been possible without the determination, resolve and sheer grit of our team, right from senior management to the general works,” said Adil.