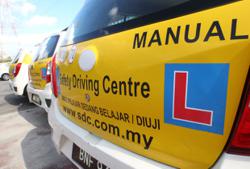 "We checked 750 vehicles and took action on 62 during the operation," he told reporters at the scene near Taman Tasek Tambahan here on Thursday.

He said they seized five lorries, two vans and 18 motorcycles.

"A total of 29 foreigners were also detained for not having valid documents.

"It is unfair for them to share the road with motorists especially when some of them do not have valid insurance or licenses," he said adding that the operation would be ongoing.