KUANTAN: Indonesia has been proposed as the second country for the implementation of the Vaccinated Travel Lane (VTL) with Malaysia after Singapore which takes effect this Monday (Nov 29), says Datuk Saifuddin Abdullah (pic).

The Foreign Minister said the VTL, if implemented, would initially involve two locations in Indonesia, namely Kuala Lumpur-Jakarta and Kuala Lumpur-Bali, before being followed by other routes.

"We do not have a time frame currently on when it can be done, but we hope it starts early next year as discussed by Prime Minister Datuk Seri Ismail Sabri Yaakob in his previous visit to Indonesia.

"This may be followed by other routes. However, we are being careful in opening the country's borders especially with the discovery of a new Covid-19 variant from Africa, which is more aggressive,” he said. 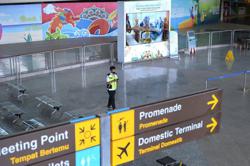