SARIKEI: The Communications and Multimedia Ministry will discuss with the Sarawak government for input on whether there is a need for candidates in the 12th state election to campaign through the government's official television and radio channels.

Its minister, Tan Sri Annuar Musa (pic) said the concept was adopted for the recent Melaka state election and a post mortem on it was being conducted.

"Sarawak is unique and different from Melaka, so we will consult the state government, see what is appropriate, what is suitable.

"The important thing is to introduce the candidates (in the Sarawak state election).

"The concept can be implemented, but I have to discuss with the state government," he said when met after opening the Keluarga Malaysia (Malaysian Family) Digital Economy Centre (PEDi) in Kampung Selalang here on Sunday (Nov 28).

During the recent Melaka state election campaign, the government allowed Radio Televisyen Malaysia (RTM) to air posters and biodata of candidates contesting in the polls.

According to Annuar, the move was aimed at giving the candidates an opportunity to introduce themselves besides helping the people to choose their representatives.

The Election Commission has set Dec 18 for the Sarawak state election, with nomination day on Dec 6. - Bernama 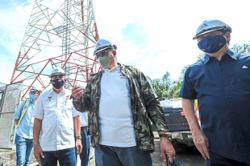