JOHOR BARU: MIC secretary general Datuk M.Asojan (pic) has managed to clinch a position as one of the party's three vice presidents.

Along with Asojan, Datuk T. Mohan and Datuk T.Murugiah also managed to retain their party positions and it is learned that MIC president Tan Sri SA Vigneswaran is expected to make an announcement on the matter soon.

Party sources said on Saturday (Nov 27) that Asojan would be among the first vice presidents from Johor after a long time.

"It was a keenly fought party election. There are also many new faces in the 21-seat central working committee (CWC)," the party sources said.

Others who were vying for the vice-presidency include the incumbent Datuk C. Sivarraajh and two new faces.

Sources said the results were only announced in the wee hours of the morning.

Meanwhile in Johor, state MIC chairman R. Vidyananthan was expected to be retained as party chief after he managed to be elected into one of the 10 positions.

"Once you get into the 10 top positions, the party president will then appoint the state chairman and other office bearers," the source said. 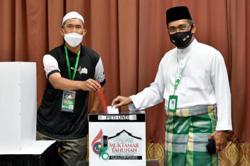