IPOH: A light rail transit (LRT) system for Ipoh city is on the Perak government’s radar to create a more modern transportation hub, besides overcoming traffic congestion in the future.

State Housing, Tourism and Local Government Committee chairman, Datuk Nolee Ashilin Mohammed Radzi said for a start, a transportation hub around the Ipoh Railway Station would be developed for the purpose.

"It involves an area of 60 hectares. However, the cost and development period of the transportation hub are still being studied.”

She said this after launching the Publicity and Public Participation Programme for the Ipoh City Local Plan Draft 2035 and launching of the Greater Ipoh Tourism Region Action Plan and Branding here on Monday (Nov 15).

Nolee Ashilin said the city’s integrated transportation system would be boosted by rapid transit buses, a tram, ordinary buses and taxis, besides the LRT.

"We will make this transportation hub more efficient and modern as in Ipoh, many still need to use their own vehicles compared to public transport to move around.

"Hence, the public transport system will be improved not only for the convenience of the residents but also the visitors and tourists, besides solving the traffic congestion problem in future and boosting real estate development,” she added.

Nolee Ashilin also said that the protection and conservation of the mountains and limestone hills around this city were among the main focus areas of the draft plan which had 107 projects involving 256 actions drawn up to improve the city.

On the Greater Ipoh Tourism Region Action Plan and Branding, she said that among the proposals was to boost Ipoh city as a hipster tourism hub, Batu Gajah as a health tourism hub, promoting the “Eco Adventure Capital” of Gopeng and revitalising the royal town of Kuala Kangsar.

"The action plan is a combination of the existing tourism products that need to be promoted and the new products introduced that can be promoted by the four local authorities together as a major tourism destination in the country,” she added. - Bernama 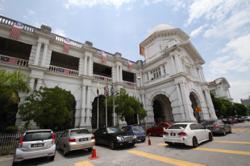