Perikatan to contest under one banner and logo

Barisan chairman Datuk Seri Dr Ahmad Zahid Hamidi had already made it clear that there would be no cooperation with Perikatan in the state polls.

Yesterday, Perikatan announced that its component parties would contest under one banner and logo.

“The Perikatan supreme council decided that Bersatu, PAS and Gerakan would contest in the election by collectively using the Perikatan logo.“Negotiations for seats will be finalised by the Perikatan seat negotiation committee,” he said in a statement.

Muhyiddin added that the supreme council had also decided that all Perikatan component parties should fully activate their party machinery, combine forces and efforts to win the trust of the people in order to win the state election.

“Perikatan will always hold on to the aspiration of building unity and ensuring an administration which has integrity and cares for the people’s well-being,” he said.

However, Selangor Umno and Selangor PAS have aired their uneasiness over their parties being on opposite sides in the election.

Selangor PAS secretary Roslan Shahir and his Umno counterpart Datuk Kamaruzzaman Johari said the situation might cast a shadow on the close ties the parties had in the state under the Muafakat Nasional pact.In Selangor, Umno and PAS have enjoyed close ties and regularly have joint activities and events.

Equal SOP treatment for all during election, says Hisham

No need to worry if you’ve done your job, says MCA rep 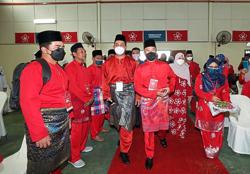