The former premier is claiming RM1.9mil in damages.

Najib, 68, as the plaintiff, filed the suit through Messrs Raj, Ong & Yudistra at the High Court here on Oct 22, naming Thomas and the government as the first and second respondents respectively.

In his statement of claim, Najib claimed that he had been wrongly accused in court in the case of 1MDB, International Petroleum Investment Company (IPIC), abuse of power under the Malaysian Anti-Corruption Commission (MACC) Act 2009 and money laundering under the Anti-Money Laundering, Anti-Terrorism Financing and Proceeds of Unlawful Activities Act 2001 (AMLATFPUAA 2001).

The Pekan MP claimed that the charges against him were part of a move that had been planned in advance by Thomas and it was also in line with the Pakatan Harapan government’s plan at the time.

Najib claimed that in 2015, Thomas had met Tun Dr Mahathir Mohamad to discuss wrongdoings and mismanagement allegedly over the 1MDB funds and also advised Dr Mahathir to take civil and criminal action against Najib over his involvement in 1MDB.

Najib further alleged that in 2016, Thomas, in an article published by Malaysiakini, had criticised and accused him of stealing 1MDB funds.

He said that on May 10, 2018, Dr Mahathir was appointed prime minister and he subsequently appointed Thomas as attorney general on June 4, 2018.

Najib claimed that around May 2018, the Immigration Department had prevented him and his wife, Datin Seri Rosmah Mansor, from leaving the country supposedly because there was sufficient evidence to investigate him (Najib) over the 1MDB scandal and that the ban was imposed months before any charges were filed against him.

"This was done just to embarrass me and create a negative opinion among the people against me,” Najib said in the statement of claim.

Najib further claimed that Thomas continued to prosecute him although the MACC had informed that it did not find any wrongdoing by the former prime minister despite the investigation.

Najib claimed that Thomas also accused him of being a criminal and abetted Jho Low, or whose real name is Low Taek Jho, and conspired with Jho Low to get the wealth of funds belonging to 1MDB.

He claimed that Thomas even alleged that Najib was determined to cover up his wrongdoing on 1MDB from foreign authorities.

According to Najib, around May 2018, several properties allegedly linked to him were raided and items were seized but, after that, a sum of money seized in the raid was ordered by the court to be returned.

As such, Najib claimed that Thomas had abused his power and had malicious intent to influence and direct investigations against him as well as planned to imprison him, besides claiming that the prosecution against him was not done in accordance with the law.

As a result of Thomas’ actions, Najib claimed that he had suffered a loss of reputation and injury to his political career because previously, he was a prominent public figure as well as respected by foreign leaders including Barack Obama and Donald Trump.

Therefore, Najib is seeking RM1.9mil in damages and a declaration that Thomas had committed misfeasance in public office, including consultation fees for the audit team to review documentation for preparation of facts to address prosecution against him.

He is also claiming general damages, exemplary damages and aggravated damages, interest, costs and other relief deemed appropriate by the court. 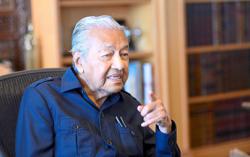