The accused being taken away after they were charged for murder at the Port Dickson Magistrate's Court.

PORT DICKSON: Two men have been jointly charged at a magistrate's court here with the murder of a 44-year-old mechanic in Kg Air Kuning Rantau, Linggi, about two weeks ago.

No plea was recorded from fishmonger S. Vickna Raja, 32, and cattle farmer R. Kalaichelvam, 45, after the charge was read to them before magistrate V. Vanita on Monday (Oct 25).

They were accused of killing A. Kannan, 44, between 6.30pm on Oct 12 and 8am the following day in front of a mini-market.

The charge, under Section 302 of the Penal Code, read together with Section 54 of the same Act, carries the mandatory death penalty, upon conviction.

The court denied bail and ordered both accused to be sent to Jelebu Prison, pending mention on Dec 8.

Earlier at the Sessions Court in Seremban, both accused were also charged with using machetes to cause grievous hurt to the father of the deceased, V. Arumugam, 69, at the same place and time.

The charge, under Section 326 of the Penal Code, read together with Section 34 of the same Act, carries a jail term of up to 20 years, a fine or whipping, upon conviction.

According to the facts of the case, the two men allegedly slashed the father and son after a group of men had attacked their nephew with an iron rod.

Both victims suffered serious injuries and were rushed to the Port Dickson Hospital.

However, Kannan had to be transferred to the Tuanku Ja'afar Hospital in Seremban due to serious head injuries.

He died the following day from multiple slash wounds. 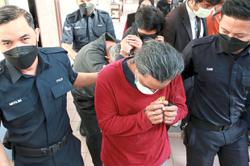