They also noted how much one is paid is not the only denominator of job satisfaction.

When locals do not take up jobs at restaurants despite competitive salaries, it should be seen from the perspective of the employees rather than employers, said UOW Malaysia KDU head of business school Associate Professor Dr Brian Wong.

“Brand loyalty is not just for consumers. It also works with employees. People want to look at the organisations they work for. What will be their image in the market?

“What kind of career opportunities will there be? Can they be part of the management in the future?” Assoc Prof Wong asked.

He stressed that employers need to brand themselves and enhance the value perception of the jobs they offer, rather than just think of salaries.

He was commenting on the shortage of workers at nasi kandar restaurants.

With dine-ins and interstate travel now allowed, Penang’s nasi kandar restaurants are seeing an increase in business, to the point that they cannot cope because they cannot get more foreign workers due to international travel restrictions.“Who are their target employees actually? Are they offering RM1,800 a month to a diploma or degree holder? Because if it is to a school leaver or dropout, that is definitely attractive.

“Degree holders would rather work with a company which has a better image and career prospects.

“Saying you will give overtime is not exactly a good promotion to attract workers,” Assoc Prof Wong added.

“This was on top of the salary of RM1,800, plus EPF and Socso contributions and outpatient hospital benefits.

“I had several join and I paid for their course fees, an initial sum of RM5,000 each.

“But after working for several weeks, they left saying they wanted to take up different courses.

“As such, it is not the salary issue but their work ethics and attitude. Locals feel they can always find better jobs.

“Foreign workers are here to earn and send money home to their families, so their work ethics and loyalty are much better as they do not want to jeopardise their jobs,” he said.

Mohamed Rizwan said the 200 big and small nasi kandar restaurants in Penang need about 4,000 workers at any one time and they cannot attract local labour although they offer decent salaries.

This contrasts greatly with the Penang Island City Council (MBPP), which does not have a single foreigner in its 3,000-strong workforce, including road sweepers.

MBPP offers a basic salary of RM1,218 for a labourer and with other benefits, he can take home RM1,963 a month, plus overtime.

These labourers are branded on social media as “Wira Baju Kuning” (Yellow Shirt Warriors), and they tend to be the first at the scene after storms to clear flooded waterways and fallen trees.

“Many have been labourers for a long time.

“They are happy with their jobs, even though they can get promoted to a supervisory position only after many years,” said MBPP Urban Services Department director Xavier Sebastian.

“Yes, it is a government job, but they are willing to take up menial tasks and stay with us, which shows their loyalty to the workplace,” he said. 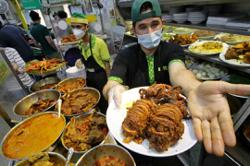