Shahidan: Over 60,000 RWKM housing units to be built in Federal Territories KUALA LUMPUR (Bernama): A total of 62,701 Residensi Wilayah Keluarga Malaysia (RWKM) housing units involving 100 projects have been approved for construction in the Federal Territories as of Sept 30.

Federal Territories Minister Datuk Seri Shahidan Kassim (pic) said that of the total, 93 projects were in the capital, three in Putrajaya and four in Labuan.

"There are still many RWKM housing units open for sale and can be applied through the official portal,” he told a media conference after officiating the key handing-over ceremony for RWKM Desa Satumas Residence here on Friday (Oct 22).

RWKM, previously known as Residensi Wilayah, was introduced to help realise the Keluarga Malaysia dream in city centres through the ownership of affordable houses in conducive environments, especially for its low middle-income group as well as the M40 category.

"The government will always implement positive improvements to ensure residences offered meet the current needs of the people,” he said.

Meanwhile, 1,346 RWKM Residensi Desa Satumas homeowners received the keys to their residences today. The housing project is a 43-storey three-block building, with each 850 square feet unit sold for RM230,000. Each unit comprises three bedrooms and two bathrooms and comes with one covered parking lot. - Bernama 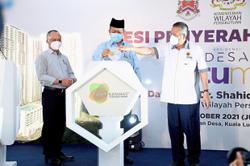