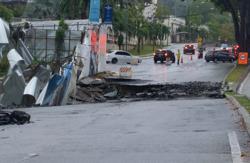 He said the ministry would release a statement soon regarding the issue.

"We need to consult all the relevant departments and find out what happened.

"But first, the road (repair works) needs to be first," he told The Star.

Both sides of the road near the intersection of Jalan Sri Hartamas 1 and Jalan Dutamas 1 were currently closed to traffic, as repair work is currently underway.

A similar incident took place at the same location on July 20 last year, where an approximately 4m wide sinkhole appeared and was patched.

Kuala Lumpur City Hall (DBKL) had said preliminary reports suggested that a burst water pipe underground caused the sinkhole, resulting in the closure of both sides of the road.