MELAKA: Datuk Norhizam Hassan Baktee (pic) says he will defend his Pengkalan Batu seat as a PKR candidate under the Pakatan Harapan coalition, claiming the party top leadership had accepted him.

Melaka Pakatan had also pledged to field him as a candidate in Pengkalan Batu, he said.

"I know most of my constituents and I am sure they will support me," he said here on Tuesday (Oct 19).

"Anyway, it's up to the discretion of the Pakatan leadership whether they want me to contest in another constituency," he said.

Norhizman said he would also ask DAP supporters in his constituency to support him if he is chosen as the Pengkalan Batu candidate.

"I am sure DAP will support a candidate in their own coalition. I don't mind even if they don't do so," he said.

Norhizam said he also had no plans to rejoin DAP after leaving the Barisan Nasional/Pakatan Nasional-led state government on Oct 4.

Earlier, DAP secretary-general Lim Guan Eng, who visited Melaka on Tuesday (Oct 19) said the party would not accept Norhizam back as a member.

Norhizam was the Melaka DAP deputy chairman when he defected to the Barisan Nasional/Perikatan Nasional-led state government in March last year.

He then left from the ruling state government along with three other assemblymen last month, leading to the dissolution of the state assembly and a state election being called for Nov 20. 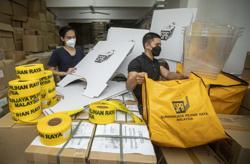