PETALING JAYA: Leaders and religious scholars should not close their eyes, shut their ears and mouth in the fight against corruption, says Sultan Nazrin Muizzuddin Shah (pic).

The Deputy Yang di-Pertuan Agong said recently there had been many reported cases of corruption and based on the reports, it was not only rampant but also carried out on a large scale.

He said what was more worrying was corruption which had been reported was now done more boldly and openly.

“Corruption is a dangerous cancer. Corruption also proved to be the cause of the suffering of people and the poor, the reason behind the fall of government and administration, the collapse of countries and empires, as well as civilisation and culture.

“Religious scholars and leaders must work together to fight corruption,” he said in his address in conjunction with the national-level Maulidur Rasul 2021 celebration yesterday.

He said in facing the current international and local scenarios, the wisdom of Prophet Muhammad’s leadership must be learnt and used as a guide, especially for those who were entrusted to hold leadership responsibilities.

“Prophet Muhammad does not merely utter words, but all of his teachings and practices reflected the leadership with high integrity.

“Clearly, Prophet Muhammad did not abuse his status as a prophet to seize power or build massive personal and family wealth.

“He is firm, never jeopardises his principles and remains loyal and trustworthy to carry out God’s orders,” said Sultan Nazrin.

The Perak Ruler added that Prophet Muhammad’s leadership was not rooted in rhetoric but nurtured with good intentions and honest sacrifices through exemplary manners and deeds.

He said Prophet Muhammad was not fascinated by worldly possessions and not tempted by gaining personal and family wealth, adding that he only left behind one weapon, a horse and a piece of land which had been donated.

“Prophet Muhammad did not leave behind massive wealth for it to be contested, but gave education and good deeds, so it will be a guidance and teaching in an effort to build a prosperous life for the ummah, that received the blessing and grace from God.

“Through his judgement and leadership wisdom, Prophet Muhammad succeeded in building a great civilisation that has lifted the ummah to the forefront of glory.

“Prophet Muhammad left two things as guidance for the ummah, which are Al-Quran and his sunnah (the way of the prophet),” said Sultan Nazrin. 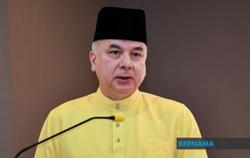