PETALING JAYA: The Melaka state election will be a testing ground for Umno to see if it can go solo in the 15th General Election (GE15), say political pundits.

They said the state election would also be a clash of personalities between those who once headed the state government.

Prof Dr Sivamurugan Pandian from the School of Social Sciences at Universiti Sains Malaysia said that the state election would be an acid test on several key matters, including to what extent the Election Commission (EC), security forces and others were prepared for an election during the Covid-19 pandemic.

He said it would also test the form of cooperation between parties on both sides of the political divide.

“It will test the recent memorandum of understanding between the government and Pakatan Harapan as well as whether Barisan Nasional will work with Perikatan Nasional or Muafakat Nasional.

“Most importantly, it will also see a clash of personalities that can become bigger than the party itself,” he said when contacted.

It is understood that intense seat negotiation is still ongoing among all major parties.

Prof Sivamurugan said many viewed the state election as being created by Umno and as such, the party had to manage this perception to avoid internal sabotage that could further divide it.

“Umno may have to face not only those who withdrew support for the chief minister, but also be prepared to take on other parties such as Bersatu,” he said.

Barisan, he added, should seriously consider if it was prepared to go solo because working with Muafakat and Perikatan had some “value” to it.

“There are a few seats where they may need support from others to win.

“If they lose this state election, morally it will affect the leadership and party as well,” said Prof Sivamurugan.

National Professors Council senior fellow Dr Jeniri Amir said performing well in the state election would be an indication of a party’s performance in GE15.

“If Pakatan can win the Melaka state election, it has a good chance of winning in the next general election.

“But if Umno wins, it will indicate that the party is on the right footing,” he said.

Jeniri said that the main question was whether Umno could stand on its own without its partners, especially PAS.

“Or is it better for Umno and PAS to be together?

“It will be interesting to see the voting pattern in the Melaka state election,” he said.

Constitutional expert Datuk Dr Shamrahayu Ab Aziz pointed out, however, that although the Melaka state election would need to be held within 60 days of the state legislative assembly being dissolved, the Yang di-Pertuan Agong still had the authority to declare an Emergency throughout the state.

The Melaka state assembly was dissolved after the Perikatan/Umno-led state government lost its majority on Oct 4.

The EC will hold a special meeting tomorrow to decide on matters linked to the state election including nomination and polling days. 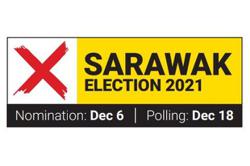