KOTA KINABALU: Sabah and its surrounding areas including Labuan are expected to be lashed by thunderstorms and strong winds over the next few days as a result of Typhoon Kompasu hitting the northern parts of the Philippines.

"But this typhoon is not hitting us directly, we are only getting the tail of it as it is moving towards Hainan, China," he said when contacted.

He said these thunderstorms and strong winds are expected in the wee hours to late mornings for the next few days.

Amirzudi said once the typhoon has moved towards Hainan, the weather will improve in Sabah.

In the meantime, he urged the public to take note of the latest weather updates and to refrain from conducting sea related activities for safety reasons. 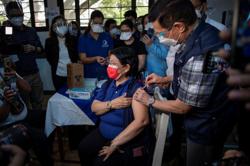