From architects and engineers to land surveyors and legal experts, he said the team, which came onboard voluntarily, would render their expertise to the victims at no charge.

‘’I am thankful to them for agreeing to help the victims rebuild their homes at this critical time.

‘’It was a double tragedy for those who lost their homes in the fire during the Covid-19 pandemic.

‘’By gathering this professional team, we hope the plan and work to rebuild these houses and premises would materialise and be completed as soon as possible,’’ he said here yesterday.

Liow, who heads the Special Task Force for the Welfare of Karak Fire Victims, said the task force, which also includes the victims, would work closely with the professional team on the reconstruction and requirements.

‘’We have met with all victims, listened to their concerns and gathered what they want in the rebuilding effort. From the ground up: Liow (centre) together with other professionals, visiting one of the areas damaged by fire, to help with coordinating efforts in the Karak rebuilding project for victims. — ART CHEN/The Star.

‘’Once the surveyor has gathered all the grant details, we will quickly draft the plan and discuss more details about the rebuilding with the victims,’’ he said, adding that the victims will get to decide on their preferred contractor in an open tender later to ensure transparency.

On the night of Oct 1, 53 houses and eight shops went up in smoke in a fire at Kampung Baru Karak.

According to locals, it was the largest and most devastating fire in the small town that left over a hundred people homeless.

Then on Oct 3, another fire broke out at the nearby Kampung Sungai Karak, destroying three houses.

Liow, who is a former Bentong MP, acted swiftly and reached out to the victims together with MCA veterans Tan Sri Lim Ah Lek and Tan Sri Chan Kong Choy and set up the special task force to assist the victims.

He said the scope of the task force included serving as a communication bridge between the victims and the local authorities, coordinating the reconstruction work, launching fundraising campaigns, liaising on all technical issues in various professional fields involved in the reconstruction.

Liow noted that RM1.67mil has been raised from members of the public as of 5pm on Sunday.

‘’We are truly grateful for the public’s support in helping the victims,’’ he said, adding that the fundraising is still ongoing.

School teacher Ho Pei Ling, 41, who lost both her home and her family-owned kopitiam in the fire, said she was thankful to the people for their donations and to Liow, for the task force’s swift action to extend help.

‘’It was good meeting the professional team to know more about how we can rebuild our homes and shops.

‘’Without them, we wouldn’t be able to manage,’’ she said, adding that she hopes to be able to have her home back for the Chinese New Year celebration. 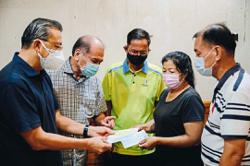