KUALA LUMPUR: The Cabinet will decide if there is a need to set up a Royal Commission of Inquiry (RCI) on former Attorney-General, Tan Sri Tommy Thomas, says Datuk Seri Wan Junaidi Tuanku Jaafar.

The Minister in the Prime Minister's Department (Parliament and Law) said he could not make the decision on his own, and will raise the matter with the Cabinet.

"InsyaAllah (God willing), I will bring this matter to the Cabinet, whether or not there is a need for the government to form a RCI on Thomas and his book," he said in his winding-up address for the 12th Malaysia Plan in the Dewan Rakyat on Thursday (Oct 7).

Earlier, Datuk Seri Abdul Azeez Abdul Rahim (BN-Baling) had asked the government to form an RCI to look into why Thomas dropped charges against 15 Pakatan Harapan leaders, and whether or not there was political interference in the matter.

On a separate matter, Wan Junaidi pointed out that there was no need to form a RCI to probe the alleged theft of case material from the Malaysian Anti-Corruption Commission (MACC).

He noted that investigation papers have already been submitted to the Attorney-General's Chambers (AGC), and investigations were conducted according to the rule of law.

"With regard to the call to form a RCI, at the moment, there is no need to do so considering that the investigation had been completed and submitted to the AGC for review and a decision on the case," he said in reply to a question by Datuk Seri Anwar Ibrahim (PH-Port Dickson).

Three MACC officers were detained on Sept 20 to assist investigations into allegations of abuse of power and malpractice in the case involving the theft of materials.

To a supplementary question from Chang Lih Kang (PH-Tanjung Malim) on the criteria for forming a RCI, Wan Junaidi said they were based on the complexity of each case.

"If the case is not complex and yet you insist on forming one, there will be no end to calls for RCIs," he said. 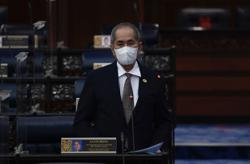