The Deputy Chief Minister I said that while the 12MP is an inclusive plan for the development of states, they cannot be fulfilled without commitment and adequate funding.

Bung Moktar said that the allocation of RM9bil for Sabah and Sarawak for this purpose and to bridge the socio-economic gaps between peninsula Malaysia and Sabah and Sarawak shows further commitment by the Federal Government towards the needs of these two states.

“We already have a detailed plan under the shared prosperity vision 2030 for Sabah but the on-the-ground implementation conducted by the various agencies involved still needs to be finetuned,” said the state Public Works Minister.

Bung Moktar added that he hopes the announced allocations can be channeled to the state government and managed by the state for the implementation of projects as leaders here know the needs of the people here better.

He said if this is difficult to do, then it was good to have a monitoring committee made up of representatives from both the state and federal governments to ensure that any infrastructure or other developments are done in line with the aspirations of Sabahans.

Touching on the 12MP initiatives, he said the government’s commitment to upgrade a 2,800km road from Dudar to Taburan up to Mendawang in Kota Belud district with a cost of RM101mil is seen as a move that can bridge the income gap between rural and urban residents.

“Although there was no mention of any allocation for the Pan Borneo project in Sabah, we hope that our earlier proposal of having the project be done via a private funding initiative can be considered,” Bung Moktar said.

He added that this is so the construction of this project can be completed faster and speed up the rural transformation for Sabah.

On matters relating to the supply of clean water in Sabah, the Lamag assemblyman hoped that the federal government would allocate sufficient funds for the state to increase the access of clean water supply to those in affected areas.

He added that the funding should be enough for the construction of infrastructure including a dam, water catchments, water treatment plants and other facilities as written in the blueprint for the supply of clean water in the state.

Bung Moktar said these projects needed a huge funding to be completed and thus benefit the people of Sabah. 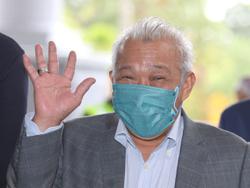