PUTRAJAYA: A Public Service Act will be introduced to ensure more effective checks and balances between the executive, legislative and judicial branches.

According to the 12th Malaysia Plan (12MP), there is a need to have a clear demarcation of powers and responsibilities between members of the administration and civil servants.

Civil servants, it pointed out, are the backbone of the country’s administration; and the increasing demands and high expectations from the people for an efficient, transparent government necessitate fundamental changes in the civil service.

“It is important to ensure civil servants remain apolitical, accountable and neutral in discharging their responsibilities to maintain the people’s trust.

“A Public Service Act will be introduced to ensure more effective checks and balances between executive, legislative and judicial powers,” it said.

The 12MP was tabled in the Dewan Rakyat on Monday (Sept 27) by Prime Minister Datuk Seri Ismail Sabri Yaakob.

PM: RM400bil set aside for ongoing, new projects under 12MP

Green growth a priority under 12MP 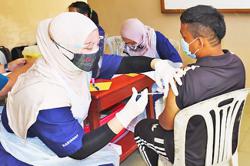