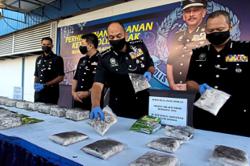 IPOH: A 56-year-old Indonesian man was arrested with two gunny sacks believed to contain syabu worth more than RM1.7mil while trying to make arrangements to ‘export’ the drugs to his country.

The man was arrested at 12.55am on Sept 26 by the roadside close to an illegal jetty at the Bagan Lipas Laut area in Rungkup near Bagan Datuk.

“Initial investigation revealed that the suspect would purchase drugs from a local distributor, and later ‘export’ the drugs via a boat at illegal jetties.

‘There will be another ‘pick-up’ boat at the middle of the sea where the items would be collected and brought into Indonesia,” he told a press conference at the Perak police headquarters here on Monday (Sept 27).

Comm Mior Faridalathrash added that this was the first time state police have encountered this modus operandi in smuggling drugs.

He said the suspect had valid documents to stay in Malaysia, and he had been in the country for over a year.

“We believe that he has been actively ‘exporting’ drugs for the past three months now.

“A urine test for drugs carried on him came out negative, and the suspect has no previous criminal record as well,” he added.

He said the drugs seized could have been distributed to about 300,000 users, and that the suspect has been remanded until Oct 2.

In another case, Comm Mior Faridalathrash said seven suspects aged between 18 and 37 were arrested in different locations in Teluk Intan for possessing drugs such as syabu, heroin and ganja.

“The urine test came back positive for the 37-year-old male suspect, and checks showed that he also has four offences on his criminal record.

“Both of them have been remanded until Oct 1, and the case is being investigated under Section 39B of the Dangerous Drugs Act 1952,” he added.

He said after their arrest, police carried out three different raids in Teluk Intan and arrested five men and seized syabu and ganja worth about RM640.

“All five of them tested positive for drugs, and four of them have previous criminal records,” he added.