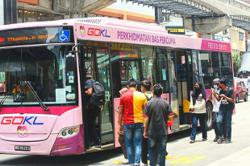 PETALING JAYA: While all the ongoing public infrastructure projects will go on as scheduled, the 12th Malaysia Plan (12MP) acknowledged that much needs to be done to ensure the provision of seamless connectivity and reliability in transport and logistics.

In the 12MP document, the details that hamper the seamless connectivity and spoil the commuting experience include "low on-time performance", and "'the absence of holistic travel demand management" that have affected the efficiency and reliability of public transport.

Describing the utilisation of public transport as remaining "below target", authorities argue that the reluctance to switch from private vehicles to public transport is partly contributed by the relatively low-cost of car ownership.

"This is evidenced by the increase in the number of registered vehicles, by approximately 6% per annum, from 20.2 million in 2010 to 30 million in 2018. The ratio of vehicles to the population, which stood at 0.9 in 2018, was one of the highest in the region," it said in Chapter 12 of the document titled Enhancing Efficiency of the Transport and Logistics Infrastructure.

The poor culture of road maintenance was also highlighted.

"Whether implemented on a corrective or preventive basis, it (road maintenance) is still an issue due to lack of resources. The preferences for corrective maintenance over scheduled maintenance have aggravated the problem. This leads to the degradation of road conditions, thus limiting mobility and increasing accident rate, while reducing road lifespan and raising maintenance costs in the long run.

"During the Eleventh Plan, federal funding allocation was only sufficient to cover 25% of the total requirement for federal road maintenance. This indicates that there is still an unmet demand for road infrastructure among others, due to resource constraints and other priorities," it said.

As for the logistics industry, it was pointed out that key constraints include poor last-mile connectivity for cargo to major entry points, inadequate facilities at ports and airports, as well as inefficient transport services.

"These cause delays and damage to goods, thus increasing handling and transportation costs. Moreover, the deployment of vessels by major cargo ship liners with a capacity greater than 20,000 TEUs, poses a challenge in terms of channel depth in major ports such as Port Klang and Port of Tanjung Pelepas.”

The absence of an integrated software for the management of the respective ports is also pointed out.

"The major ports, namely Port Klang, PTP and Johor Port have established their own individual port community systems. These systems assist in managing and facilitating cargo movement and vessel traffic. However, these systems are not integrated, which hinders the effective coordination and optimisation of ports and logistics services," it said.

The aviation sector also needs to see further investments, given that demand for air travel over the next two decades is expected to double to 7.2 billion passengers by 2035, compared with 2016.

"However, the existing Communication, Navigation and Surveillance System (CNS) equipment and infrastructure that have been in operation for more than 15 years, affect the efficiency of air traffic management. Hence, the system and equipment will need to be updated to ensure efficiency and competitiveness of the aviation services," said the Plan.

The government also agreed that putting more cargo onto rail is the way to go for sustainability and freeing up road space.

"The utilisation of the current railway track capacity for the movement of cargo was at 30%. This was mainly due to the relatively higher cost of carrying cargo via rail compared to roads. It has been further aggravated by the limited scheduled trips for cargo trains.

“As a result, only 1.6% of total land cargo was transported by rail. Although there is a rail network in Port Klang, only 5% of cargo movement in the port uses rail due to the inefficiency of railway services and the lack of door-to-door services. During peak times, the rail network from the north and south was congested, and priority was given to passenger trains.

"'Trucks were therefore preferred to haul cargo, resulting in frequent plying of heavy vehicles and traffic congestion on roads connecting to the ports. In addition, there was untapped potential for using rail to transport bulk cargo, especially for dangerous and hazardous materials. Currently, these goods are being transported via road which poses risks to other road users and the surrounding areas."

The Plan also highlighted the lack of coordination between the federal and state governments when it comes to matters such as public transport policy, planning and development.

"This hampers the optimisation of infrastructure planning in the various states. The lack of coordination in terms of tariffs, regulations and port facilities among port authorities has resulted in unhealthy competition between ports. The National Logistics Taskforce (NLTF), which was established in 2015, lacks the capacity to monitor the implementation of the Logistics and Trade Facilitation Masterplan as well as to propose policy directions for the logistics industry.

“The development of airports is carried out without adequate planning due to the absence of an overarching masterplan to set the strategic direction for airports development. This led to underutilised terminal capacity in several airports," it said.

On logistics, the Plan said multiple permit issuing agencies (PIAs) and manual documentation during cargo clearance have caused delays in the processing of imports and exports goods.

"These have contributed to congestion at the border. At most entry points, PIA officers are not stationed full time due to high operational costs and low cargo volume. This resulted in longer processing time and higher costs of doing business. The delay in the full implementation of uCustoms further impedes the efficiency of cargo clearance. Several environmental standards have been introduced to promote sustainable transport.

“However, the adoption of these standards is done voluntarily, resulting in low adoption among the transport and logistics operators. Poor awareness and cost constraints also contributed to low compliance rates."

The Plan also recognises the lack of transparency when it comes to information such as prices, location, type, space and size, utilisation rate and operators of warehouses, thus impeding effective logistics planning and decision making.

“Although the warehouses are licensed by the respective local authorities, the quality of services provided at these warehouses is not monitored by them," said the document.

Lastly, the Plan will also address the currently free-for-all or lightly regulated area of commercial arrangements in commercial shipping.