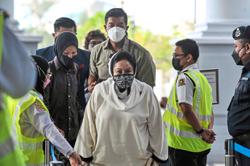 KUALA LUMPUR: Datin Seri Rosmah Mansor has failed in her bid at the High Court to disqualify lead prosecutor Datuk Seri Gopal Sri Ram from conducting the prosecution in her case and to nullify the trial involving a solar hybrid project in Sarawak.

Justice Mohamed Zaini Mazlan, in his brief decision, said he found the appointment of Sri Ram by former attorney general Tan Sri Tommy Thomas was validly done under Section 376(3) of the Criminal Procedure Code in Thomas’ capacity as the public prosecutor.

On Thomas’ oral fiat (authorisation), Justice Mohamed Zaini said Thomas had clearly stated that after appointing Sri Ram to lead the prosecution in the 1Malaysia Development Bhd (1MDB) cases, he had authorised Sri Ram to conduct the prosecution against Rosmah.

The judge said it was public knowledge that Sri Ram had been conducting the prosecution against the applicant (Rosmah) from the onset at the High Court, which the senior prosecutor did with a team of deputy public prosecutors from the Attorney General’s Chambers.

"It defies belief that Sri Ram would do so without the knowledge and sanction of Thomas, being the former AG then, and also the current AG.

"I am resolute that this authorisation need not be evidenced in writing," he said.

As such, Justice Mohamed Zaini said he did not see the necessity to address the validity of the first written fiat, which was being challenged by Rosmah.

"They have ceased to become a moot point as I have found Sri Ram’s appointment under Section 376(3) to be valid.

"In my view, there is no necessity for the first nor the second written fiat to be issued," he said.

The judge said he took note of the fact that the AG had issued a second written fiat out of “an abundance of caution”, which he opined was to allay the applicant’s complaint on Sri Ram’s appointment.

"I accept that it (second written fiat) was issued as an added precaution in the event that I am disinclined to accept either Thomas’ version on Sri Ram’s appointment or the first written fiat," he added.

The court also agreed with the prosecution that the AG was entitled to make Sri Ram’s appointment with retrospective effect as set out under Section 50(b) of the Consolidated Interpretation Act 1948 and 1967.

"The applicant's applications are therefore dismissed," he said during an open court proceeding here on Friday.

Rosmah’s lawyers Datuk Jagjit Singh and Datuk Akberdin Abdul Kadir asked the court to allow a stay of trial pending an appeal at the Court of Appeal.

Deputy Public Prosecutor Ahmad Akram Gharib however objected and said that appeals should not be treated as an ‘automatic stay’ unless in cases involving punishments such as whipping and death penalty.

Justice Mohamed Zaini said a stay of criminal proceedings would only be granted in the rarest cases.

"I am dismissing the application for a stay. You can, of course, apply for a stay at the Court of Appeal," he said.

The trial had concluded at the prosecution stage and Rosmah was ordered to enter her defence.

Prior to the commencement of her defence trial, the wife of former prime minister Datuk Seri Najib Razak filed the application to disqualify Sri Ram from continuing the prosecution against her on claims that Sri Ram's appointment letter to be a senior deputy public prosecutor in her case was not valid.

She also sought to have her trial nullified due to this and that she be acquitted based on a mistrial.

Rosmah is accused of receiving a total of RM6.5mil from Jepak Holdings Sdn Bhd managing director Saidi Abang Samsudin between Dec 20, 2016 and Sept 7, 2017.

She is also charged with soliciting a RM187.5 mil bribe, out of a total of RM1.25 bil project awarded to Jepak Holdings's Saidi, through her aide Datuk Rizal Mansor.

The defence trial is expected to begin on Oct 5.