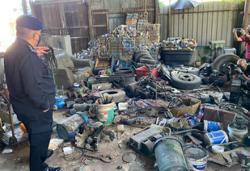 GOMBAK: A syndicate targeting to steal lorries and reselling them at lower prices, even as low as RM7,000 per lorry, has been crippled by the police.

“Three members were caught during the operation. The first arrest was made on Sept 18, after we stopped a lorry in Pulau Lumut, Shah Alam. Following that, an arrest was made here where we located around 12 lorries, a forklift and other machinery which we believed were used to modify stolen lorries.

Investigations showed that the first and third suspects were responsible for stealing the lorries while the second was the buyer.

Police estimated that the stolen vehicles were worth around RM2.8mil.

The suspects were believed to have been well versed in modifying the lorries, including changing chassis numbers and repainting them according to their customer’s specifications.

Parts from other stolen lorries would also be used to modify a vehicle, to accommodate the needs of their customers.

Police believe that the gang had been active for around six months.

At the workshop, investigators found that the culprits had also kept the contents of the stolen lorries, including e-commerce packages that were enroute to their buyers.

“The main thing they were after were the lorries, they didn’t think too much about profiting from the stolen packages,” said Comm Abd Jalil.

All three suspects aged 39 to 41 years old were found to have had prior convictions, with one previously charged under the Prevention of Crime Act.

They have been remanded until today. 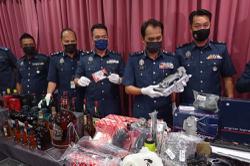