SHAH ALAM: A 24-year-old man who was arrested for driving against the flow of traffic and causing the death of two teenagers earlier this month, has been charged at the Magistrate’s Court here with murder.

K. Devaaswin, 24, who works as a marketing executive at a private company, was charged with killing Nur Afiqah Abdul Karim, 18, and Muhammad Hafiz Syamir Dzul Asri, 19, at 1.50am at KM8.6 of the Federal Highway near Shah Alam on Sept 12.

The charge was framed under Section 302 of the Penal Code, which carries the death penalty upon conviction.

No plea was recorded as murder cases are under the High Court’s jurisdiction.

Shukor requested the court for time for chemistry, post-mortem and Puspakom reports as well as other relevant documents for the case to be transferred to the High Court.

The defence asked that the accused be referred to a doctor as he was unwell.

Nur Faizah fixed Oct 21 for the next mention of the case and ordered that Devaaswin be sent to the hospital for treatment.

The two teenagers were killed when the car they were travelling in crashed head-on with a pickup truck driven by a man against the flow of traffic on the Federal Highway.

Shah Alam OCPD Asst Comm Baharudin Mat Taib then said that investigations showed that the pickup truck driven by a 24-year-old man was going against the flow of traffic before colliding with the car. 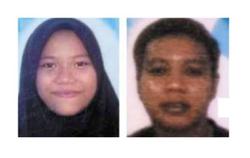