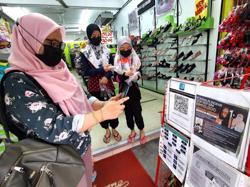 ALOR SETAR (Bernama): The MySejahtera team has resolved over 500,000 complaints of digital vaccination certificates not being displayed on the MySejahtera application within a week, says Health Minister Khairy Jamaluddin.

He said the Health Ministry (MOH) took note of the complaints regarding the problem among individuals who had received either the first dose or both doses of the Covid-19 vaccine and would continue to ensure the application updated vaccine recipients’ information from time to time.

"Last week, I set a target of resolving as many complaints as possible regarding the digital certificates in the MySejahtera application and, as a result of the investigations, the MOH has identified several causes.

"A total of 95,347 complaints were related to MySejahtera users. Among the problems identified were due to the vaccine recipient’s status as a dependent, causing the individual’s digital certificate to be linked to the MySejahtera account’s owner,” he told a media conference in conjunction with his working visit to Kedah at Wisma Darul Aman here on Sunday (Sept 19).

Another problem identified, he said, was that of MySejahtera account holders not confirming their identity card numbers in the application.

He said that to solve this problem, users are required to verify their names and identity card numbers in the Covid-19 Vaccination section and complete questions related to personal information.

Apart from that, he said a total of 71,408 of the complaints were found to have been due to the PPV not completing the documentation process after an individual had received his or her vaccine jab.

He said that for this problem, the MySejahtera team was coordinating with the PPV involved to ensure that users would receive their digital certificates in their MySejahtera application.

"I also want to remind the PPV staff to check and ensure every vaccine recipient receives the digital certificate in his or her MySejahtera application before they leave the PPV.

"Other than that, there were also complaints from individuals who received their vaccination at PPV that were not managed by the MOH and ProtectHealth Corporation (Protect Health). This problem occurs because these PPVs do not use the MySejahtera system,” he said.

Meanwhile, Khairy said that to overcome any difficulties due to the non-display of digital certificates on their MySejahtera application, individuals who had been fully vaccinated could use the vaccination physical card, which is a printed card filled in by a health worker when they get vaccinated at the PPV, to enjoy the facilities provided to fully vaccinated individuals.

"So, I ask that all premises accept this physical card if the fully vaccinated individual does not have the digital certificate displayed on his or her MySejahtera application,” he said. - Bernama