UNIVERSITI Tunku Abdul Rahman (UTAR) will employ a hybrid mode of teaching, giving students the choice of how they would like to attend classes when the new term begins in October, reported Sin Chew Daily.

Based on a survey by the university, only 25% of students said they were willing to return to physical classes.

“As for smaller sessions such as tutorials or practical classes, students can choose to attend these online or physically, or a mixture of both,” he said.

He also said over 95% of its teaching staff had already received their first dose of the Covid-19 vaccine and expected all to be fully inoculated by the end of this month.

Higher Education Minister Datuk Dr Noraini Ahmad announced on July 8 that all universities would reopen in October with the varsities allowed to decide on its teaching modes.

> The Chinese daily also reported that there were rumours of “trouble in paradise” after a celebrity couple, Taiwanese actress Rainie Yang and her husband Li Ronghau, were found to be living separately despite being in the same city.

The couple was spotted having dinner together on Sept 11 in Beijing.

They were also photographed holding hands while exiting the restaurant.

However, the two went their separate ways after that, with Yang heading back to their home while Li was later found to be staying at a hotel.

The news sparked speculation online as to the reason why the couple, separated for 304 days by border closures due to the Covid-19 pandemic after registering their marriage in late 2019, was not staying together.

> After having all her presence scrubbed off the Internet in mainland China without any apparent reason, actress Vicki Zhao was spotted for the first time in her hometown in Anhui, reported Sin Chew Daily.

The 45-year-old billionaire, who went off the radar for over 20 days, was seen at the office of a telecommunications company on Sept 14.

Photos of the actress showed her without makeup and casually dressed.

It was earlier reported that Zhao’s name was removed from all television series, films, short videos and promotional materials on China’s streaming platforms such as Tencent Video, iQiyi and Youku.

Zhao, who shot to fame for her role in My Fair Princess, is also a businesswoman, film director and pop singer.

The Chinese government, which recently clamped down on “misbehaving celebrities”, did not explain the reason for her disappearance. 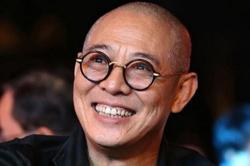