KOTA KINABALU: To commemorate the 58th Malaysia Day, Datuk Seri Ismail Sabri Yaakob has pledged to allocate more than RM9bil for Sabah and Sarawak as he affirms his government’s commitment to the Malaysia Agreement 1963 (MA63).

In his first official visit to the state as Prime Minister, Ismail Sabri said RM4.66bil will be set aside for Sabah and RM4.47bil for Sarawak.

“It is being channelled under the 12th Malaysia Plan’s (12MP) Rolling Plan 1 for the 2021 development allocation, which will be presented to Parliament on Sept 27.

“This development allocation is one of the highest among the states, a testament to the government’s commitment towards improving the economic growth and prosperity of the people of Sabah and Sarawak.

“With the principle of ‘Working with the People’, the government will continue to focus on these two states so that the people can enjoy equal benefits,” he said during the Malaysia Day national-level celebration last night at the Sabah International Convention Centre.

Noting that the issue of “equal partners” is always raised on Malaysia Day, Ismail Sabri gave his assurance that attention will be given to MA63 issues that concern Sabah and Sarawak’s interests.

“The government will continue to fine-tune matters that need to be resolved through negotiations, through the MA63 special council chaired by me, with Sabah and Sarawak Chief Ministers and eight federal ministries as members.

“We are grateful that despite our states being separated by the South China Sea, every challenge has been overcome and faced with tolerance; democratically based on the Constitution and the laws of the country,” he added.

On the general front, he said the government’s focus at present will be on the recovery of the economic sector which has been affected by the Covid-19 pandemic.

Infrastructure and basic amenities will also be given priority to ensure balanced development across the region, he added.

“In an effort to prepare Sabah and Sarawak to transition towards 5G, the government has allocated RM7.7bil over the next five years, with Sabah receiving RMRM3.61bil and Sarawak RM4.09bil.

“The government remains committed to improving broadband services in both states. No one will be left behind; everyone will have access to the digital world, and everyone must be connected.

“It will benefit 3.8 million people in Sabah and 2.8 million in Sarawak.

“We hope to no longer hear about those who have to climb trees or rooftops to get better Internet access after this,” he said. 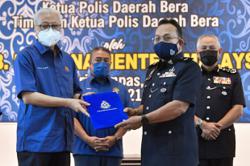