KUALA LUMPUR: The frustration of having to scour through a complex web of Covid-19 dos and don’ts will be a thing of the past once a more simplified version of standard operating procedures (SOPs) is introduced, says Senior Minister Datuk Seri Hishammuddin Hussein.

He said currently, there are 181 National Recovery Plan SOPs and the government is reducing them to just 10.

“I think it will be easier for the public to understand the SOPs after we reduce them from 181 to about 10.

“The National Security Council (NSC) said they can do this in two to three weeks.

“We will get the Communications and Multimedia Ministry to announce the SOPs to the public using available platforms.

“The ministry will coordinate the announcements to ensure the information disseminated is consistent and easy for people to understand,” Hishamuddin told a press conference in Parliament yesterday.

Hishammuddin said the meeting had several agendas which centred on the easing of Covid-19 restrictions, the reopening of sectors and the transition into the endemic phase.

“The four of us have principally agreed on several Covid-19 relaxations, and this will be presented to the Prime Minister, and he will decide when to announce them,” he added.

He added that the meeting also discussed whether interstate travel can be allowed.

“We spoke about this, and we feel that there are many risks we need to consider. We need to look at what activities we want to allow. There’s also the issue of states being in different phases.

“It is not that simple and it would be irresponsible if we just reopened borders fully.

“But we are considering these relaxations because of people’s mental well-being as they have been under lockdown for too long.”

Hishammuddin said it is now up to the Tourism, Arts and Culture Ministry to show that the travel bubble plan which is set to commence tomorrow is a good and safe initiative.

“If Langkawi fails, we will not open other new travel bubbles.

“So it is incumbent on the ministry to prove to us that they can implement it in Langkawi first, before we open other destinations,” he said of the Langkawi travel bubble initiative.

He added that he will meet Tourism, Arts and Culture Minister Datuk Seri Nancy Shukri to discuss the travel bubble SOPs.

This includes whether travellers must be tested before arriving in Langkawi.

“We hope there won’t be a spike in cases (in Langkawi). If there are, we need to make sure we have adequate hospital capacity and so on.”

On another matter, Hishammuddin who is also Defence Minister, said he will liaise with Wisma Putra over the terrorism threat travel advisory released by the Japanese embassy to its citizens in Malaysia.

“I am aware of the travel advisory and have been briefed by our military Intelligence on the issue.

“It leaned toward an issue on a social media platform.

“The Inspector-General of Police has already made a statement on the matter. There is no basis at all related to terrorism,” he added

“In terms of real threat, I can verify based on military intelligence and the Inspector-General of Police that there is no need to be worried,” he said. 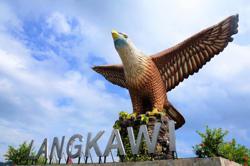