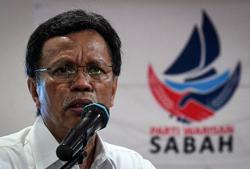 The 29-year-old Muar MP maintained his innocence and claimed trial to the two charges which were read again before Sessions Court judge Suzana Hussin during a mention yesterday.

Syed Saddiq was previously charged with the same offences before judge Ahmad Kamal Arifin Ismail at the Johor Baru Sessions Court on Aug 5, where the judge allowed the case to be transferred to Kuala Lumpur.

According to the first charge sheet, Syed Saddiq allegedly transferred RM50,000 from his Maybank Islamic Bhd account to his Amanah Saham Bumiputera account, whereby the money was said to be proceeds from illegal activities.

He allegedly committed the offence at a Maybank Islamic Bhd branch in Taman Perling in Johor on June 16, 2018.

For the second charge, he allegedly transferred the same amount of money involving the same accounts at the same place on June 19, 2018.

The charges under Section 4(1)(b) of the Anti-Money Laundering, Anti-Terrorism Financing and Proceeds of Unlawful Activities Act 2001 carry up to 15 years’ imprisonment, and a fine of no less than five times the amount of gratification, or RM5mil, whichever is higher, upon conviction.

The court fixed Nov 30 for mention.

In a separate Sessions Court, judge Azura Alwi also fixed Nov 30 to hear the update on Syed Saddiq’s application to transfer his charges to the High Court.

The court was informed by DPP Muhammad Asraf that the application would be heard before High Court judge Justice Mohamed Zaini Mazlan on Nov 25.

The prosecution said both the cases would be heard together as they involved the same potential witnesses.

On July 22, Syed Saddiq claimed trial before judge Azura to a charge of criminal breach of trust involving RM1mil, and another charge of misappropriation of monies involving RM120,000, said to be funds that belonged to his former party, Parti Pribumi Bersatu Malaysia.