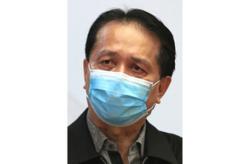 PUTRAJAYA: Decriminalising suicide is key towards preventing suicidal acts in the country, says the Health Ministry.

In conjunction with World Suicide Prevention Day on Friday (Sept 10), Health director-general Tan Sri Dr Noor Hisham Abdullah said recognising that suicide is not a crime is a step towards getting more people to seek early treatment.

“The Health Ministry supports efforts to amend or repeal Section 309 of the Penal Code, which deems attempted suicide as a crime.

“Decriminalising suicide will be a shift towards preventing suicidal acts in the country.

“This will encourage those affected to come forward and seek help as early as possible,” Dr Noor Hisham said in a statement.

Currently, Section 309 states that whoever attempts to commit suicide and does any act towards the commission of such an offence is punishable with imprisonment for up to a year or a fine, or both.

Dr Noor Hisham said the number of deaths caused by suicide had risen in the past year, particularly due to the Covid-19 pandemic which has taken a huge toll on the people’s mental health.

“Police statistics showed that the number of suicide deaths rose from 609 in 2019 to 631 last year.

“As of July this year, there have been 638 suicide deaths reported to the police, compared to 262 cases between January and July last year.

Dr Noor Hisham said it is the collective role of society to identify early symptoms of depression and suicidal behaviour among loved ones, especially in the current pandemic situation.

He added that the community must also learn to get rid of the stigma related to suicidal behaviour.

“If depression is not identified and treated properly, it can lead to suicidal behavior. Suicide behaviours include suicidal ideation, suicidal plan, suicide attempt and death due to suicide,” said Dr Noor Hisham.

Health Minister Khairy Jamaluddin also encouraged those with mental health issues to reach out and talk to someone, reassuring them that "we are here for you" in a tweet.

"In conjunction with World Suicide Prevention Day, I want to reach out to people who are battling depression and anxiety - you are not alone;" he said.

“Be aware of family members and people around you, especially those affected by the pandemic. Provide support and encourage them to seek help and treatment.

“Do not spread news, videos or pictures related to suicide incidents on social media. Remove the negative stigma and do not be judgmental on suicide attempts,” said Dr Noor Hisham.

Khairy reminds those battling depression, anxiety that they are not alone