SEREMBAN: There are no walk-in Covid-19 vaccinations for foreigners at the Pantai Community Hall near here, says state health exco S. Veerapan.

He said a viral message stating that foreigners could get inoculated at the hall for free was fake.

"It is being said that foreigners who wish to get the Pfizer vaccine can just walk in on Sept 1, 2 and 3 to get their shots, but this is not true.

"This is an irresponsible act which has caused a lot of confusion and must be stopped," he said on Thursday (Sept 2).

Veerapan, who also holds the environment, cooperatives and consumerism portfolio, said the health authorities were only carrying out an outreach programme in the Pantai sub-district on the dates mentioned.

This, he said, was due to poor Internet connectivity in the area and some locals not having mobile phones.

He said authorities will conduct a probe and action will be taken against those who spread fake news.

“This is a serious offence as it is tantamount to undermining the state government’s credibility and capability in carrying out the vaccination programme,” he added. 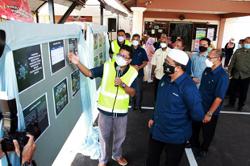