By JUNAID IBRAHIM and ASHLEY TANG 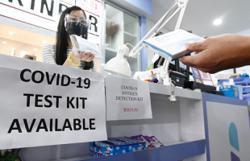 What’s in the market: Consumer and health groups are calling on the government to subsidise the cost of Covid-19 self-test kits or give it free to low-income families. — AZLINA ABDULLAH/The Star

PETALING JAYA: Covid-19 self-test kits should be made more affordable with the government subsidising the cost or giving them free to those from low-income families, say consumer and health groups.

The government’s efforts of encouraging the public to self-test for Covid-19 is lauded by consumer groups, but the self-test kits should cost less.

Federation of Malaysian Consumers Association president Datuk Dr Marimuthu Nadason said the government should subsidise the cost of the self-tests kit as not everyone can afford them.

“Imagine a family of five, when they need to undergo the test, they need to fork out almost RM100 for everyone in the family.

“The government should do everything possible to help the rakyat, including giving subsidies for the kits, or even giving them free to the underprivileged,” Dr Marimuthu said.

He suggests that the home testing kits be sold for as low as RM10.

Currently, there are 12 self-test kits that are approved by the Malaysian Device Authority (MDA) in the market, costing between RM28 and RM41.

In Singapore, according to a report by The Straits Times, the cost of self-test kits ranges from S$10 (RM31) to S$13 (RM40), while in South Korea, the self-test kits, which are available for purchase through online shopping platforms, cost as low as 9,000 won (RM32).

Consumer Association of Penang education officer NV Subbarow also agreed to the idea of government subsidies for self-test kits for the public.

“Some countries even give it out for free, and we should be able to do the same thing,” he said, adding that the self-test kits should be distributed to B40 families for free.

The relevant ministries and agencies, he said, should also monitor the situation to prevent unscrupulous price hikes.

Malaysian Public Health Physicians’ Association president Datuk Dr Zainal Ariffin Omar believes that the current prices of the self-test kits are not affordable, especially for those in the B40 group with a large family.

“It should be reasonably priced for the retail sector.

“It should also be subsidised or provided free-of-charge by the government to certain groups such as those in the low-income category and people with big families, when necessary,” he said.

Dr Zainal added that the authorities should also approve more of these products so that the prices would be competitive in the market.

Malaysian Pharmacists Society president Amrahi Buang said self-test kits were being sold in premises other than licenced pharmacies and healthcare facilities, noting that there were also self-test kits that have not been given conditional approval for use being sold to the masses.

“What is the government going to do about this as this goes against the directive of the MDA that stated that these test kits must be sold in licensed pharmacies and healthcare facilities.

“Who’s monitoring the online sales of these self-test kits? They are selling like hot cakes.

“The quality and safety of these medical devices are not ascertained as they are not given approval by the MDA.

“There may be fake ones and this will cause harm to the public,” he said.

A study to determine the suitable retail price for Covid-19 self-test kits and whether price control is needed is expected to be completed by the end of this month.

He said accurate pricing was important to protect the interest of consumers, but at the same time, it must also take into account the business side of manufacturers, sellers and wholesalers, so as not to disrupt the supply chain.