Bird lover ensures there’s a future for his feathered friends

Birdman of Johor: Wong feeding his macaws which are bred at his Wonderful Life Cares Birds Breeding Farm in Gelang Patah in Johor. — THOMAS YONG/The Star

GELANG PATAH: For businessman James Wong, rearing birds was just a childhood hobby after he picked up the interest from his late grandmother who used to rear chickens on her farm land.

Now the 45-year-old is one of the biggest licensed bird breeder in the country and is passionate about ensuring the survival of birds, especially those on the endangered list.

Wong has set up hundreds of cages around his sprawling bungalow lot, which are not just used for breeding but also to train the birds.

“I never imagined my hobby would turn into such a huge venture,” he said, adding that besides the local market, he also exports them to bird lovers around the world.

Wong said each bird bred at his farm had to be tagged and needed a licence from the state Wildlife and National Parks Department (Perhilitan).

“All my breeding is done the natural way. I do not cross breed my birds as I am a firm believer of saving the species for future generations,” he said, adding that he started venturing into the business after completing his SPM at the age of 17.

He said presently, Perhilitan has categorised birds in Malaysia into the protected and unprotected species under CITES (Convention on International Trade in Endangered Species of Wild Fauna and Flora).

CITES is an international agreement between governments that aims to ensure that international trade in specimens of wild animals and plants does not threaten their survival.

On poaching, Wong said it is still happening but he does not purchase birds that were procured in this way.

Wong said the key to successful breeding is to feed the birds with good food and vitamins.

“Actually, we have a good breeding programme as our birds in captivity lay more eggs than the ones in the wild,” he added.

“All this depends on the characteristics of the bird such as its colour, length of its tail and its voice,” he said, adding that a wild shama has a tail of between five and six inches but the ones he bred could reach 16 inches.“People also like to go for rare and special birds like the albino, those with ‘panda eyes’ or gold-coloured ones,” he said. A lot of patience is needed to train a bird to sing or obey commands, too.

Wong said each day, he spends about 30 to 40 minutes to train his birds.

Wong also noted that he would release birds that do not make the commercial cut.

Besides having six full-time workers, his wife and four children also help with caring for the birds.

Wong has been working with zoo managements such as Melaka Zoo to organise talks on animals and bird shows.

“In Melaka, our shows were a hit with more than 3,000 to 5,000 visitors per day during last year’s December holidays.

“However, due to the Covid-19 pandemic, we have not been able to have our shows,” he said. They used to have three to four shows a day during the festive holidays.

Wong, who also has a licence to import other kinds of wild animals, hopes that the shows could resume after everyone has been fully vaccinated. 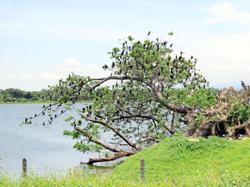