By ZAKIAH KOYA and AUSTIN CAMOENS

Top choice: Sources also confirmed that all the MPs have put down their signatures and decided to throw their weight behind Ismail Sabri.

“He has the numbers and is our choice for the ninth prime minister,” said sources.

Sources said it was a unanimous decision that was not questioned by any MP during a meeting of Barisan MPs held at the coalition’s headquarters at Kuala Lumpur World Trade Centre last night.

Sources also confirmed that all the MPs have put down their signatures and decided to throw their weight behind the Umno vice-president.

“All statutory declarations from the Barisan MPs will be sent to Istana Negara on Aug 18 as requested by the King,” said a source.

Umno’s Rembau MP Khairy Jamaluddin, who walked out at around 11pm, said the decision was unanimous but only smiled when asked who the candidate was.

Padang Besar MP Zahidi Zainul Abidin said the Umno leadership would announce the name of the candidate, commenting that he was credible.

“We want stability for the country and economy and we need to focus on Covid-19,” he said.

Pengerang MP Datuk Seri Azalina Othman said Ismail Sabri had received the support of Barisan MPs to be the next prime minister. 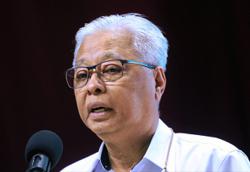