WITH public crematoriums being fully booked, families have to wait for more than a week to cremate relatives who have died of Covid-19, according to the Malaysia Funeral Public Association.

Sin Chew Daily quoted its president Kong Thian Hau as saying that crematoriums were unable to cope with the rising Covid-19-related deaths, causing a backlog of bodies to be cremated.

“We learnt that hospitals in Selangor and Kuala Lumpur urgently need help to cremate the increasing number of Covid-19-related bodies.

“Even though the two crematoriums under the care of Kuala Lumpur City Hall have rearranged their timetables, it was not enough.

“For example, the Cheras public crematorium has set Tuesdays, Thursdays, Fridays and Sundays to cremate only the bodies of those who died of Covid-19,” he said, adding that Mondays, Wednesdays and Saturdays were for non- Covid-19 cases.

Kong said the Cheras public crematorium only had seven furnaces and could handle a maximum of 28 bodies a day.

He said public and private crematoriums in Petaling Jaya were small and their capacities were limited.

“If the pandemic is not brought under control, the waiting period would worsen and this will cause the backlog of bodies to grow. It is difficult to imagine how bad the situation can get,” he said.

Kong urged the government to build more crematoriums and repair furnaces which had broken down to address the issue.

> A Chinese film director is suing the producers of The White Storm 2 movie, which starred veteran Hong Kong actor Andy Lau, for allegedly plagiarising the plot of one of his films, China Press reported.

Gou Yusheng, who is based in China’s Sichuan province, will take Lau and six other companies involved in the production of the movie to court.

He is accusing The White Storm 2 of stealing his story in the 2006 crime thriller Love From Angel and will be demanding 99.99 million yuan (RM65mil) in damages.

Gou claimed, among others, that The White Storm 2’s plot points and story background had been lifted from his own movie The Perfect Lover. 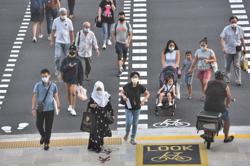 PM: International tourists allowed to holiday in Langkawi under travel bubble pilot project
Whisky controversy: Misuse of name cannot be allowed to confuse Muslims, says Hadi
An icon is back: Jonker Walk night market set to reopen with over 60% of traders returning
Boulder dash: Motorist has lucky escape as car ends up only lightly damaged from huge falling rock
Complete vaccination for adolescents to be a condition in all SOPs soon, says PM
Penang eateries facing dire manpower shortage, hope foreign workers will be allowed back into country
PM: Johor and Terengganu to move to Phase 4 of NRP from Monday (Oct 25)
TV crew member dies after car hits his bicycle in Cyberjaya
Police raids net drugs worth over RM1mil, one suspect nabbed
Khairy: Remember to wear your face masks after eating when dining out