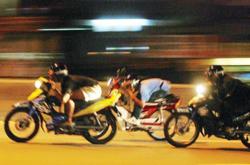 Sjn Mohd Arifah and Kons Mohd Muradzi died while in pursuit of a suspected street racer during Ops Samseng Jalanan to clamp down on mat rempit.

Hamzah offered his condolences to the families of both policemen.

"The police will take stern action without compromise to ensure that justice is served for the families of both policemen.

"May their souls be blessed by Allah and placed among the righteous," he said in a statement on Monday.

Acryl Sani had earlier conveyed his condolences to the families of the two policemen on behalf of Royal Malaysia Police on Sunday.

“The duties of a law enforcer are full of risks and challenges, but this will not dampen our spirit to continue providing the best service to the public.

“The police will ensure that the welfare of the families of both the deceased will be looked after,” he said in a statement.

On Sunday, Sjn Mohd Arifah and Kons Mohd Muradzi died in pursuit of a suspected street racer on the Silk Highway about 1.30am on Sunday.

ACP Mohd Zaid had said investigations showed that the victims – who were from the Kajang police headquarters – were pursuing the suspect.

“At KM24.4 of the highway, both victims crashed into each other during the chase.

“The area is a hotspot for illegal racing,” he said in a statement.

It was learnt that the policemen suffered serious head injuries and both died at the scene. 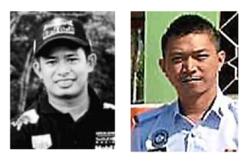