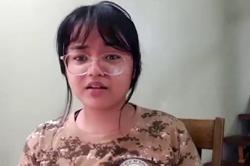 SUNGAI BULOH: There is no further action in connection with the case involving a physical education teacher who allegedly made rape jokes in class.

“I was informed that the DPP had issued an NFA order on the case,” she said yesterday.

It was reported that Ain Husniza Saiful Nizam has received a letter of demand seeking damages of RM1mil for alleged defamatory remarks she made.

“Today, suddenly during online class I received a letter of demand on ‘defamatory statements’ I apparently made,” she said. Legal action: Ain Husniza and her parents have been asked to pay RM1mil for defamation.

She did not elaborate what the purported “defamatory statements” were.

“All I ask is for everyone to pray for me that everything will be made easier,” she said, thanking everyone for their support.

Ain Husniza made headlines earlier this year for calling out her physical education teacher who allegedly made rape jokes in class.

In a Facebook post, her father, Saiful Nizam Abdul Wahab, said the letter, which was delivered at 2pm, was for Ain Husniza, himself and his wife.

“There are five demands and one of them is to pay RM1mil in damages. We received the letter from the law firm of Rasshidi Ema & Yung.

“Following lawyer’s advice, we will not comment further on this for now,” he said.