PETALING JAYA: The political temperature appears to have heated up after letters were sent to Umno MPs on Thursday (Aug 5), demanding them to declare whether they are together with the party in retracting support for the Perikatan Nasional government.

It is understood that these letters were sent to all Umno MPs on Thursday (Aug 5) evening.

Should the Umno MPs refuse to comply with the party's stance on retracting support for Tan Sri Muhyiddin Yassin as Prime Minister, action will be taken against them under Article 20 of the Umno constitution, which deals with party discipline.

It is also understood that these letters were hand-delivered to Umno MPs on Thursday evening.

"I will not be replying to that letter," he said briefly.

Nazri reminded MPs that Muhyiddin's parliamentary majority will be determined in September, and the Prime Minister had said this was consented by the Yang di-Pertuan Agong.

Nazri also said more will be revealed by Perikatan-friendly Umno MPs in a press conference on Friday (Aug 6) morning after a meeting.

"At 10.30am, all the MPs supporting the government will meet," he said briefly.

Ongoing developments in Umno are being closely monitored, and internal party sources have indicated concerns that the infighting could further cause division within the party.

"It's going to end badly with the party if this continues much longer," said the party source.

Earlier this week, Umno president Datuk Sri Ahmad Zahid Hamidi dropped a bombshell during a press conference on Monday (Aug 2), where he claimed that a total of 11 Umno MPs rejected Muhyiddin as Prime Minister, and statutory declarations (SDs) have been sent to the Yang di-Pertuan Agong.

However, Muhyiddin said only eight Umno MPs had retracted support for the Perikatan government and eight SDs were sent to Istana Negara.

Responding to Muhyiddin, Ahmad Zahid said a further list of Umno MPs retracting support for Perikatan had been submitted to the Istana Negara on Wednesday (Aug 4). 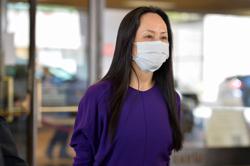