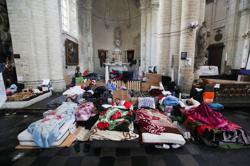 PETALING JAYA: As Covid-19 numbers continue to surge, an activist has staged a hunger strike in Taman Tun Dr Ismail, Kuala Lumpur, calling for immediate intervention by the authorities in the way the pandemic is being managed.

"The Mahatma brought the British Empire to its knees without firing a single shot. He followed two principles: never submit and never harm another," he said.

Tan was particularly incensed that the ongoing Constitutional crisis and question of parliamentary support for Prime Minister Tan Sri Muhyiddin Yassin could drag on till September, as Covid-19 continues to infect over 20,000 and kills more than 200 a day.

He pointed out that deaths could surge in September if nothing is done by then.

"I don't personally encourage mass gatherings. I don't encourage anything that might put anyone except myself at risk.

"I will do what any Malaysians can do. I will take a short walk out of my home and sit at the corner of Jalan Rahim Kajai and Lorong Rahim Kajai 4 in TTDI," Tan, who is also a columnist at The Star, said in a Facebook post on Wednesday.

When contacted on Thursday (Aug 5), Tan said there were about 10 police officers who came to question him over the hunger strike.

"They were all quite friendly, polite and professional. No complaints. They asked me what I was doing here, I explained, and we all seemed to come to a mutual understanding," he said.

Asked how he felt about the hunger strike, Tan said he was still in high spirits despite "sleeping rough".

"Haven't showered for a while so I'm a bit stinky," he added.

Tan also said he received tremendous support from the public, who gave encouraging words to him when they walked past his tent.

Tan said he would try his best not to eat until his five demands were met. They include: returning decision-making powers in Covid-19 matters to professionals or reconvening Parliament immediately; preparing a RM500mil fund to buy medical equipment for hospitals; and allowing frontliners to reveal the true situation of the crisis without any repercussions.

Tan also called for the government to make public the list of companies allowed to operate during the ongoing movement control order and to provide free N95 face masks and hand sanitisers at all hospitals and police stations.

"Solidarity to Tan who is currently on a hunger strike," he said.

"I know first-hand that this cannot be easy for him. He doesn't use public toilets, he needs to 'go' at home. He needs very specific pillows to sleep.

"He grew up in TTDI, went to private school, graduated from Harvard, and he loves burritos," she wrote on Facebook.

Chow said Malaysians can contribute to Tan's cause by sharing verified information on social media about the plight of frontliners.

She said frontliners are also welcome to share their personal accounts of handling the pandemic.

"Resist the culture of forced silence, we will be behind you all the way!" she wrote.

Chow also said Malaysians can donate to assist needy Malaysians at the Tzu Chi Covid-19 Solidarity at its Maybank account 512491125866 or the Hospital Emergency Fund at its CIMB account 8001367104, and invited the public to send her names of children "orphaned by Covid-19".

Muhyiddin said on Wednesday a vote of confidence will be tabled in Parliament in September to determine his support in the Dewan Rakyat.

Opposition MPs have criticised the time-frame, saying that if Muhyiddin did indeed possess a majority he should be able to test it in an Emergency sitting.