Spidey brings a web barrage of cheer to hospital

KUALA LUMPUR: It’s the friendly neighbourhood Spider-Man to the rescue of frontliners and visitors at the Hospital Ampang.

Health staff and visitors were pleasantly surprised when the superhero swung by – armed with stationery and other goodies.

A businessman, who only wants to be known as Lee, said the sight of Spider-Man was a “good lift-me-up” after one of his family members tested positive and was admitted.

“I saw Spider-Man walking into the hospital lobby after sending food to a relative admitted two days ago.

“No visitors were allowed so I could not see him.

“But it felt good seeing the superhero, although they don’t exist in real life. The character reminds us to stay brave and never give up fighting,” he said.

Spider-Man’s appearance was part of GoCare’s Be MY Hero awareness campaign, which aims to support frontline workers and charities as well as care for underprivileged groups affected by the pandemic.

GoCare project manager Xilas Ngang, who has been donning the superhero suit since May, said he still managed to bring on the smiles.

“We want to bring joy to the hospital staff and frontliners to thank them,” he said. 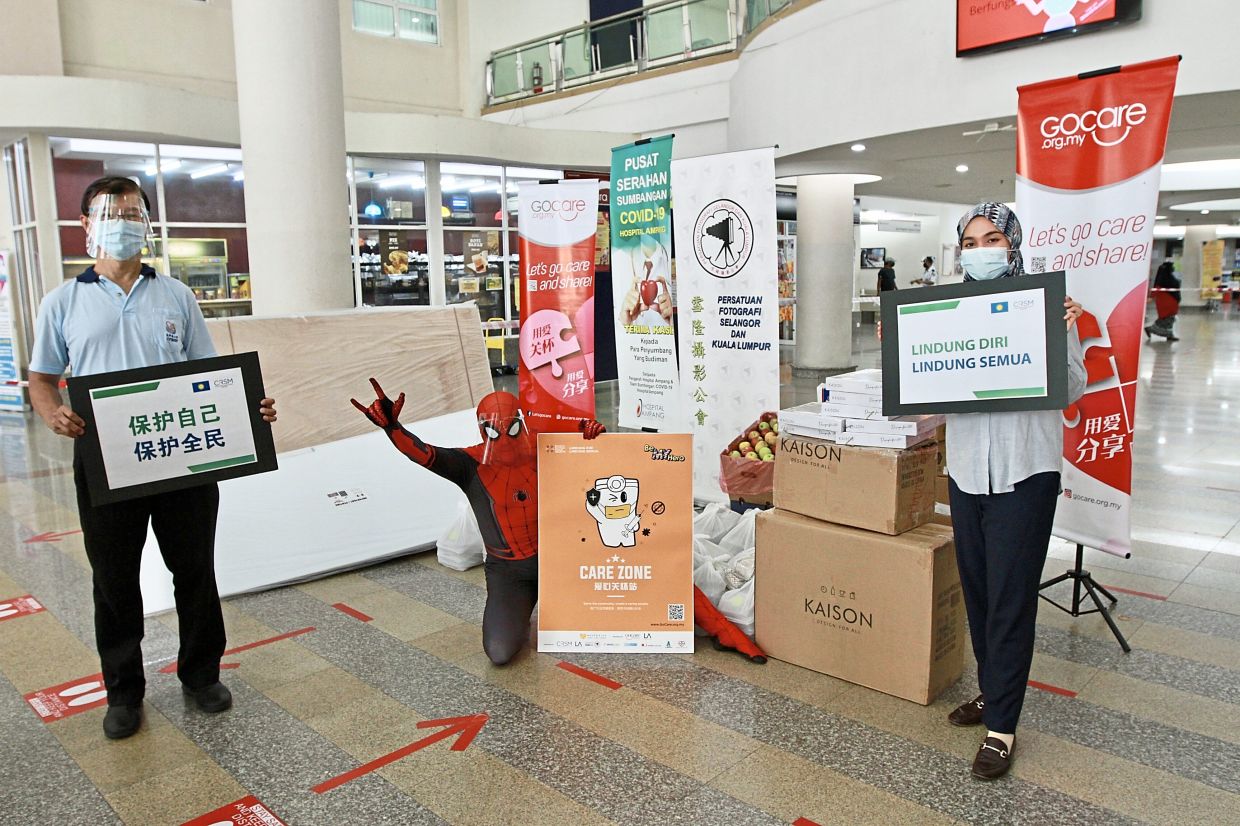 Lifting spirits: Ngang in his Spider-Man costume presenting donations of stationery and food packets to Hospital Ampang. With him are Amira Nashuha and Selangor CRSM chief Ch’ng Soo Chau.

Together with representatives from the Kuala Lumpur Selangor Photography Association and the Crisis Relief Squad of MCA (CRSM), Ngang also presented 200 food packets, chocolates and stationery items to the hospital.

He said the hospital had reached out for whiteboards and stationery after it was converted into a full Covid-19 hospital on June 23.

Since many businesses were unable to operate due to pandemic restrictions, Ngang said it was hard for the hospital to get the items.

“With help from donors and members of the public, we managed to get the whiteboards and several clocks,” he added.

Hospital Ampang deputy director for management Amira Nashuha Yahaya said the appearance of the superhero was a pleasant surprise for hospital staff and visitors.

“They were excited to see the superhero, with many asking about him.

“We know this is a very challenging time for Malaysians and I think this gesture helped lift morale,” she said.

Expressing her gratitude, Amira Nashuha said the stationery items were needed in the hospital, especially in operation rooms and wards to write down patient details.

“The food packets and fresh fruits will certainly cheer up the frontliners on duty. We are truly thankful to everyone for their kindness,” she added.

Food packets and chocolates were also distributed to the needy in Kampung Baru Ampang and two orphanages in Ampang.

“Since May, we have sent out 10,000 packets of food to hospitals and 120,000 food packs at the community-level nationwide,” said Ngang, adding that those who wished to support the initiative could do so at https://gocare.org.my/product/hospital-fundraising/.

GoCare is a CRSM initiative to raise funds for underprivileged individuals and groups.