Shyamalan Jaganathan leaving the Jalan Duta Court Complex with his lawyer, July 22, 2021. The 33-year-old man had caused a scene at a nasi lemak stall in Taman Desa, and is to be charged for threatening violence after he was told to put on a mask by the seller. — GLENN GUAN/The Star

PETALING JAYA: A 33-year-old man pleaded not guilty to a charge of failing to wear a face mask in public.

J. Shyamalan claimed trial to the offence of failing to comply with Covid-19 standard operating procedures (SOPs) which allegedly took place at a nasi lemak stall along Jalan Desa Bakti in Taman Desa, Kuala Lumpur, at about 10.30am on July 18.

If found guilty of the offence under Rule 17(1) of the Prevention and Control of Infectious Diseases Regulations 2021, he can face a maximum RM50,000 fine, six months jail or both upon sentencing.

He also claimed trial to an offence under Section 509 of the Penal Code for allegedly speaking offensive words to Cherrilyn De Centino at the same time and place.

If found guilty of the offence, Shyamalan faces a maximum five-year jail term, a fine at the discretion of the court or both upon sentencing.

Wong directed for the accused to pay another RM2,500 in bail with one surety for the second charge.

Mention of the case has been set for August 24.

Later, when walking out of the court complex, the man asked the press if they wanted his signature.

"You don't want my signature? Drink a lot of water. It is very hot," he said while showing his water bottle to the press taking his picture as he was walking out of the Kuala Lumpur Court Complex.

"That's enough. My eyes are hurting, " he then said to photographers. 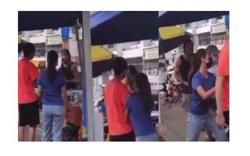