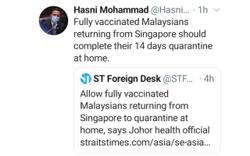 PETALING JAYA: Not all heroes wear capes, especially in the case of a woman in Kuala Lumpur who needed to don a PPE suit to take care of her 84-year-old grandmother who had Covid-19.

It was the ultimate trial for Siti Aishah Ibrahim (pic) when all 12 members of her family tested positive after one of them had contracted the virus on July 13.

“All of us, including uncles and aunts, live in six houses as neighbours, so when one person tested positive, everyone else had to do a swab test.

“My first swab test was negative, but my grandmother had a positive result,” she told mStar, Star Media Group’s Malay-language portal.

The 36-year-old project executive bought personal protective equipment (PPE) so that she could help care for her grandmother at her home.

“My grandmother was admitted to the hospital after she collapsed from a heart attack early this month. After that, she was not very mobile.

“When she was discharged, we arranged for the same hospital bed to be used at home.

“As I am close to my grandmother, I would use the PPE to care for her by feeding her, changing her diapers, and cleaning her,” she added.

Although her grandmother was a Category 4 patient who required oxygen, she was told to undergo home quarantine as the intensive care units in hospitals were full.

“The doctor advised this because we had a hospital bed and oxygen assistance at home, and my grandmother could be looked after by family members who were undergoing home quarantine as well,” she said.

“However, I can only take three to four hours of wearing the PPE suit.

“Although I had the air-conditioning switched on, it still feels so hot in the PPE.

“I really respect frontliners. I don’t know how they can use PPE the whole day long. I admire their sacrifice,” she added.

However, Siti Aishah had only been caring for her grandmother for about a day before she herself started experiencing symptoms.

After going through a second swab test, she was found to be positive as well.

Siti Aishah said she hoped her experience, which she shared on TikTok, would lead to greater awareness among people to be cautious and not to let their guard down against Covid-19.