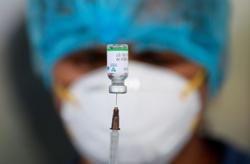 KUALA LUMPUR: Police are investigating a man's claim that he was injected with an empty syringe at a vaccination centre here.

When contacted, the 28-year-old software engineer claimed he went to the Mitec KL vaccination centre on Saturday (July 17) to receive his first dose of vaccine and never thought the empty syringe issue would happen to him.

"I followed all the necessary procedures, and waited for my turn, and it was all smooth and efficient.

"When I walked into the booth, there were two staff members sitting down, and I went in with another patient," he said, adding that he asked whether or not he could record the vaccination process and one of them said no, so he respected that.

He said there was a tray with one syringe and a vial but he also noticed the plunger on the syringe was pushed all the way to the end.

"She then rubbed my arm with an alcohol swab and just took the empty syringe and jabbed it into my arm.

"About two seconds later, she pulled it out, put on a plaster and said it was all done," he said, adding that she asked him to proceed to the next station.

He said he confronted her about it and she replied that it should have been done properly but if he wanted, she would inject him again.

"She then started the process all over again.

"After everything was settled she asked me to proceed again and I confronted her about the first jab and she hesitated.

"She replied that she injected me a second time because I insisted she did not inject me the first time," he said, adding that he proceeded to the next station and asked a worker there if they had experienced anyone else who had been injected twice.

The supervisor was then brought over to talk to him.

Tan claimed that the supervisor took him back to the booth and the person on duty admitted what she did and apologised.

"After I proceeded to the final station, the supervisor called me to talk and assured me that I received my vaccination during the second injection," he said.

He added that he was raising the issue because it could be extremely dangerous if anyone did not receive proper vaccination.

"The complainant lodged the report at the Sri Petaling police station and investigations are under way," he said.

A similar incident was brought to light earlier this month after business developer Simon Ng claimed he was injected with an empty syringe in a small town.

He only received the vaccine after pointing it out to the vaccination centre personnel.

Selangor police said an enquiry paper was opened in connection with the case.

Cops probe claim that man was injected with empty syringe

‘Impossible to be vaccinated with an empty syringe’